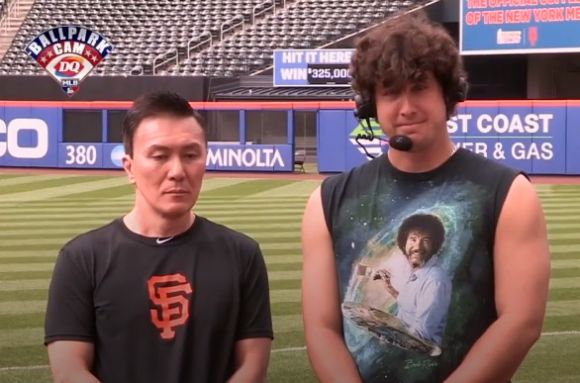 It's remarkable just how tone deaf people can be.

For our purposes here, let's use a professional athlete as an example.

If there was a priest and a rabbi involved as well, this might've been the set up to a killer joke, but sadly, that wasn't the case.

The specific clip in question can be found in a lovely Deadspin piece.

And here's the rest of the interview:

Depending on your personal taste, Holland is a funny dude.

But damn, the stereotypes were really flying.

This Asian gentleman -- and Giants employee -- was introduced as a hype man and was subsequently used as a comedy prop, complete with repeated bowing and a painfully mocking accent from Holland.

While this seemingly wasn't meant to offend, perhaps Holland should channel his inner Michael Scott in private going forward.

The wacky madcap has since apologized, so we'll accept it in the spirit it was offered.

However, maybe Holland can dust off his slighly less offensive Harry Caray impression next time.

Actually, that's a Will Ferrell impression they're attempting, but let's not split hairs.