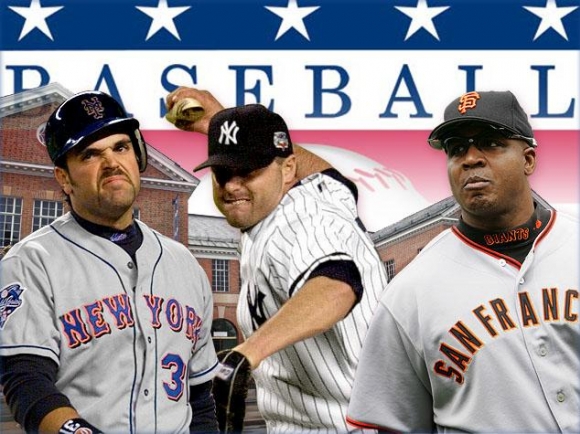 “A date which will live in infamy…”

Please don’t get me wrong. I’m not trying to equate the Baseball Hall of Fame and surprise attacks, however yesterday’s HOF induction will be one of the significant dates in MLB history and may even come to define the steroid era.

And it’s starting to feel like the BBWAA is declaring war on suspected steroid users.

How is it possible that the all-time home run king and a seven-time MVP (he should’ve received nine MVP’s), Barry Bonds, didn’t get 40% of the vote? Roger Clemens, a seven-time Cy Young award winner, 1986 AL MVP, and perhaps the greatest right-handed pitcher since Walter Johnson, only received 37.6% of the vote. Rafael Palmeiro is only one of only four ballplayers to achieve 500 home runs and 3000 hits and barely qualified to stay on the ballot for 2014!

Congratulations, HOF voters, for making the festivities in Cooperstown feel more like a memorial service than a celebration and recognition of some of the greatest careers we’ll ever see in our lifetime.

Now don’t get me wrong, I think Palmeiro doesn’t deserve induction into the HOF not only for his finger wagging to Congress, or the fact he hit three dingers his first season in the league, or the cheesy Viagara commercials, but he was the first prominent player to be suspended during the season for failing a drug test and became a trend setter by blaming his failed test on something his teammates gave him.  Lucky for Raffy, it wasn’t roofies!

If there was any sort of poetic justice or romanticism left, the voters would’ve elected long-time Houston Astros teammates Jeff Bagwell and Craig Biggio in 2013 and allowed them to share the stage. After all, Biggio is the all-time career modern era leader in Hit By Pitch (HBP).  Only the great Hughie Jennings was plunked more times than Biggio, and was only by two.  Imagine if body armor had been around in 1896? (They would've used it on the base paths, too, because at that time, one way to get a runner out was to peg him with the ball when he wasn't touching a base!)

What do we get instead?  The great-grandniece of former Yankees owner Jacob Ruppert takes 20 minutes to make her way to the podium because the stage is not wide enough for a motorized scooter. This had to have been the first induction ceremony where the city of Cooperstown had a waiting list for handicap parking permits.

In a day where we could have easily had five living legends recognized for their tremendous baseball ability and achievements, we got an owner that was elected for essentially buying Babe Ruth from the Red Sox and building the original Yankee stadium, an umpire that had such high moral integrity as to call a player out in the 1908 World Series, and a catcher who didn’t use a glove. That’s like a blacksmith not using hot pads!

So where do we go from here? Should we change the voting system by allowing chimpanzees to have a say? Do we just keep the status quo and allow voters like ESPN’s TJ Quinn, who confessed he hasn’t covered baseball since 2002 and graciously conceded that he isn’t qualified to vote for the HOF? Aaron Sele received one vote in his first year on the ballot, so one writer clearly has different standards than others. Notice how I used that in the singular tense?

This writer should be publicly humiliated by standing on scaffolding for three hours and wearing a scarlet letter on his blazer, except not an A for adultery, but M for moron would be fine with me!

I expect redemption next year as Greg Maddux, Tom Glavine, and Frank Thomas are all first-time eligible players for the HOF.  There are some early whispers that Greg Maddux may be the first player to receive 100% of the vote. Cal Ripken Jr came the closest in 2007, when he received 98.5% of the vote, however eight voters concluded that Ripken was not worthy of HOF induction besides the streak, 3000 hits, two-time league MVP, World Series MVP, and had a brother who wrote a bad word on his 1989 Fleer baseball card.

Maddux should get the highest vote total and percentage next year out of any player ever. He has no ties to steroids or PEDs and was dominant in the most prolific era of offense baseball has ever seen. He won four straight Cy Young awards and teamed with Glavine to produce one of the best baseball commercials ever: Chicks dig the long ball!

Honestly, there is no reason to keep Glavine or Thomas out of the HOF on their first try, either. Voters are allowed to vote for 10 players each year, and if it were up to me, 10 players would be elected next January.

My ballot would include:

The good news is memorabilia collectors won’t have any new autographs to collect from the 2013 HOF class. However, 2014 could be a lucrative year for travel agents and the tourist industry in upstate New York!