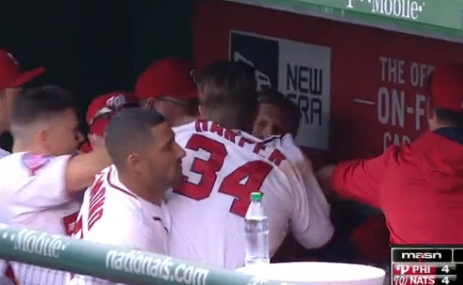 The 2015 Washington Nationals have been one of the biggest disappointments in recent memory.

The team that was billed by baseball experts as the favorite to win it all will be staying home this October.

The culmination of a bummer year and the team’s big attitudes came to a head on Sunday, when known jerk Jonathon Papelbon and Bryce Harper got into a full-scale brawl in the Nats dugout:

The fight served as a perfect snapshot of the Nationals season, as turmoil within the organization prevented the club from living up to their potential.

The most confusing aspect of the whole scenario is that Matt Williams, in his infinite wisdom, decided to pitch Papelbon later in the game.

As one would expect, dude was none to stellar, ultimately serving up the eventual game-winning home run as well as loading the bases before being taken out. The Nats fans, rightfully pissed at Papelbon for both attacking the team’s star player and blowing the game -- albeit a meaningless one -- serenaded the pitcher to a chorus of boos.

Williams had to PR after the game, where he fared just as well -- ie- horribly -- as Papelbon did during the game.

Dude’s voice had the tone of a man who knows he'll most likely be in the unemployment line in the coming weeks. What with everybody and their mother blaming him for Washinton’s collapse -- much of it justified -- it’s hard to imagine a scenario where he'll be the skip next season.

The hell of it is that Papelbon was right to call out Harper for his lack of hustle on the play. Williams benched the kid earlier in the season for doing the same thing.

However, as the new guy -- and one whose personality resembles an unknown rash -- Papelbon should've left any upbraiding to another vet -- such as Ryan Zimmerman -- who would've made the point in a less dynamic but more effective fashion.