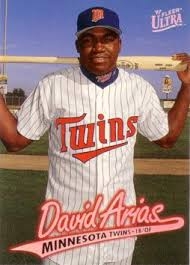 David Americo Ortiz Arias, better known as Big Papi around the big leagues, has had an interesting season to say the least.

And his declaration about the Chicago Cubs yesterday just makes it that much weirder.

According to Ortiz, aka David Arias, the Cubs playing a majority of day games at Wrigley Field messes with players' internal clocks, or in other words, their mojo.

Perhaps players are spending too much time at Berlin and the Smart Bar to handle the barrage of day games.

I think this logic could be applied to any team having a game start before 4.00pm, local time, as being detrimental to a major leaguer's night life of carousing and debauchery. It would be most deleterious to the New York Yankees, where players are required to shave before every game and keep those sideburns above the ear. Right, Mattingly? Perhaps they could charge up the Norelco before they go to bed at 5.00am, or is that still the night before?

This dude had one of the greatest World Series ever and was named MVP by going 11-16, 2 HRs, 6 RBIs, 7 runs, and a cool .688 BA in just six games. And now he walks this season with press clippings strewn in his path.

And now, he'll have some time to reflect on his first half of 2014, as he won't be joining his American League contemporaries in Minnesota for the All-Star Game next week.

Most likely, he'll be yelling at the official scorer through his 72-inch plasma television.

But party on, dude. You've got time.