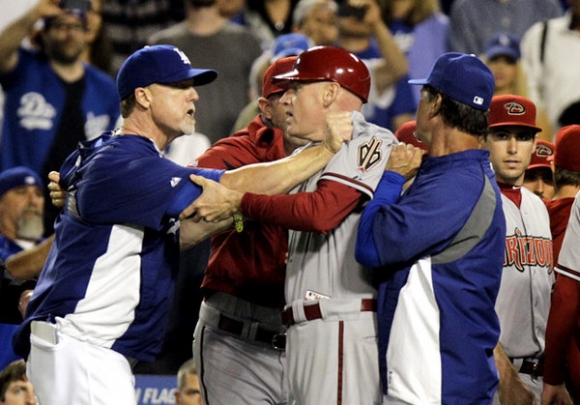 Back in the 1980s, there was an obscurely seminal moment when the Unwritten Rules of Baseball jumped the shark.

It was late in the season at Wrigley Field. Two clubs well out of the pennant race were logging their time. Then, one batter on the team that was trailing popped up. When he returned to the dugout, he was greeted with high fives all around.

Why? He had just reached his 400th official plate appearance, kicking in a bonus clause in his contract.

And note those were the years when today's so-called sages like Don Mattingly, Kirk Gibson, Mark McGwire, and Alan Trammell were becoming household names.

Fast forward to last night at Chavez Ravine. The first-place Diamondbacks were facing the frustrated Dodgers, clinging tenuously to a slim lead over the battle-tested San Francisco Giants and battering-ram Colorado Rockies. The San Diego Padres are only a hot streak behind them. Even Los Angeles is well within striking range if they ever live up to their salaries.

In short, the NL West has all the appearances of going down to the wire this autumn. Playoff berths and bonuses will be on the line. It's a frame of reference that doesn't allow for margin of error. Or luxuries of misplaced machismo.

The bottom of the sixth saw new sensation Yasiel Puig at the plate with one down and the Bums trailing, 2-0. Diamondback righty Ian Kennedy had already punched him out -- figuratively but ironically speaking -- and induced him to ground out, but Puig had still entered the game 16-for-32 and seemingly due.

Kennedy is Old School. As Cardinal Hall-of-Famer Bob Gibson once put it, the outer half of the plate belongs to the pitcher, and if he has to move a hitter back to reclaim it, he will. High and tight.

Since moving to the Diamondbacks in 2010, Kennedy has hit 41 batters. An ultimate irony might be that the ghost of Hall-of-Famer Don Drysdale -- who hit 154 batters in 14 years -- would probably nod at Kennedy's stat in approval. Unless the target was a Dodger.

Well, last night, Kennedy hit a Dodger. Puig. The heater was high and tight, glanced off Puig's shoulder, and then grazed his nose. More on that in a moment.

However, when Greinke was at the plate in the bottom of the seventh, Kennedy came high and tight with another message that found Greinke's shoulder and deflected up into his helmet. The sparks ignited in a flash, and the brawl was on.

Back in the day, a fight most likely never would have happened. And it shouldn't have.

Now, if a pitcher wants to intentionally go head-hunting, the target would be behind the batter's head.

A batter's standard evasive maneuver for a high and tight pitch is to instinctively curl away from it, hunching his helmeted head down to protect his neck, which would put him right in the way of the beanball. This would cause a bench-clearing brouhaha and for good reason.

Had Greinke leaned away in this manner -- as he should have known to do; he's in the National League now -- he might have gotten the hint without being hit. And if he was still pegged, it would have only been his shoulder; his head would have been well-protected.

Surely, somewhere in their early careers, the likes of Mattingly, Gibson, McGwire, and Trammell would have imparted that chapter of the Unwritten Rules of Baseball to their charges. It's what veterans are supposed to do. That they didn't borders on irresponsibility, especially if a key player would have been injured -- again, in Greinke's case -- or is slapped with a long suspension.

The purpose of unwritten rules is for players to police themselves. It works well in hockey; fights serve to keep star players from being run, keeps stick blades away from faces, and keeps stick butts away from abdomens. It used to work well in baseball.