Cueto Defies the Odds; Gets Beaned by a Line Shot 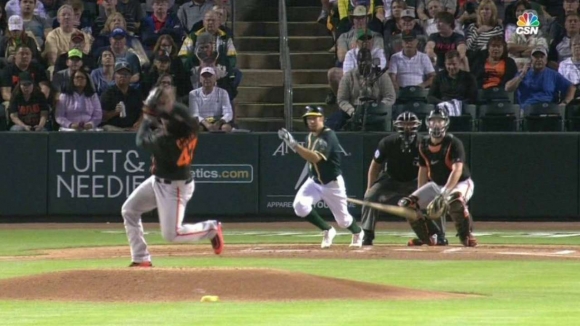 Earlier this spring, San Francisco Giants hurler Johnny Cueto got drilled by a line drive in a game against the Oakland Athletics.

Of course, this had nothing to do with any sort of planning on the part of the batter Billy Burns.

Either way, it was scary.

Virtually every hitter will approach the plate employing some type of strategy.

Whether they're working to get into the groove in spring training or emerge from a slump, one common tactic is to work on sending scorching line drives up the middle.

What with the Giancarlo Stantons and Matt Hollidays of this world -- incredible strength; amazing bat speed -- increasing in the modern game's population, it seems like only a matter of time before a pitcher won't be as lucky as, say, Aroldis Chapman or Brandon McCarthy and walk away to play another day:

To date, Alex Torres -- now of the Atlanta Braves -- is the only major leaguer willing to wear a protective helmet while he's on the mound.

Frankly, that's because the rest of baseball's moundsmen don't like the look:

Dude probably has the good sense never to buy a lottery ticket, either.

Note, though, that this report was filed in October 2014:

But it's long past the time when it should catch up with the damage a line shot can do.