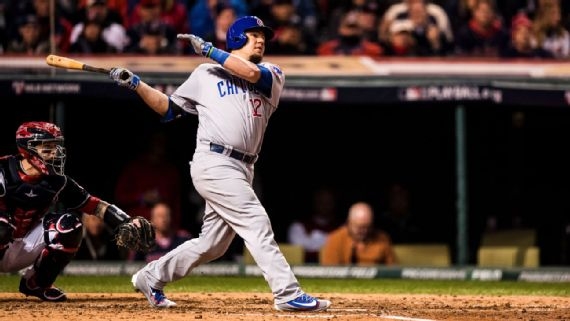 The World Series' second act started an hour early to beat a rain forecast, which gave the Fuzzies' Jake Arietta more than enough time to shine.

Just as the 2014 AL Cy Young holder, Corey Kluber, held court in Game 1, the NL's reigning Cy Young recipient hoisted his colors in this one.

And he got all the offense he needed from the Chicago Cubs' post-season superhero:

Kyle Schwarber's accelerated rehab after what was thought to be season-ending knee surgery has thus already paid dividends.

Odds of more dramatics will be diminished for the next three games at Wrigley. Dude's knee hasn't been medically cleared for him to play defense.

Frankly, having seen Schwarber play defense, if it wasn't for his bat, he wouldn't be cleared at all.

Joe Maddon's gonna have to pick his moment to use Schwarber as a pinch-hitter, so on more than one front, the Cubs will be patient.