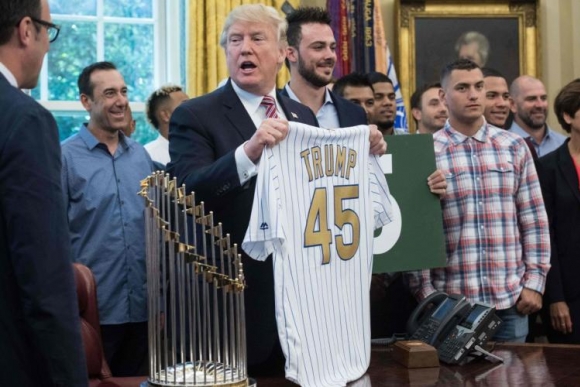 The World Champion Chicago Cubs seemed to make a point of getting their official White House visit on the books as quickly as possible.

The team stopped by back in January, a week before former President Obama's second term came to an end.

They were able to avoid The Donald then, but on a recent trip to DC, some of the Cubs found themselves in the West Wing yet again.

One of them was outfielder Albert Almora Jr, who seemed to have devised a unique way of greeting the president.

It's certainly fun to assume this gesture was premeditated and directed at the current administration, the leader of which was sitting about three feet away at the time.

The expression on Almora's face would even suggest his culpability, as the young outfielder appears on the verge of a giggle fit.

But alas, this was clearly too much to hope for.

It turns out there was another finger involved, as Almora and some other Cubs helpfully explained.

Dude even retweeted a defense from a fan who had apparently examined the photo closely.

Fine Albert, we believe you.

If anyone was gonna do something like that, it probably would've been team owner Tom Ricketts, who got the Trump alternate facts treatment back during campaign season.

While there didn't appear to be any subversive activity at play during the Cubs most recent White House visit, the whole thing just seemed a little off.

Then again, literally everything coming out of DC these days is bordering on the surreal.