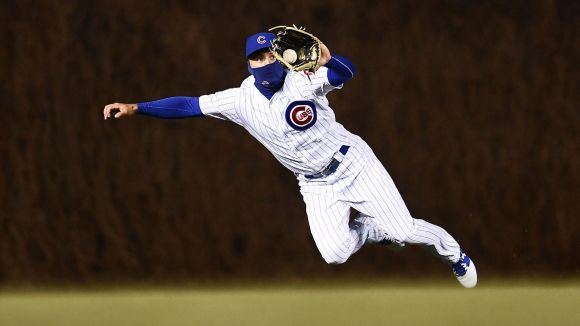 The Chicago Blackhawks aren't doing anything this spring since they didn't make the Stanley Cup playoffs.

The Cubs should've signed them en masse, as they're all dudes who come from regions where playing in the winter is a way of life.

For actual baseball players to attempt their craft in today's conditions at Wrigley, someone needs to look up from counting their profits and realize what's happening here.

The Cubbies and Atlanta were playing in 25ºF weather in the fourth inning, for chrissakes!

Yes, the Braves built up a 10-2 lead before seeing it melt away -- ironic pun -- as the ridiculous conditions took their turn on them in a nine-run eighth from hell frozen over:

In a sense, the players have no one to blame but themselves.

Neither they nor the owners want the World Series to bleed into November on a normal schedule. Toss in the point that the current Collective Bargaining Agreement allowed for more off-days, which the players wanted, and the only way the regular-season schedule could expand was when a certain month was supposed to be going out like a lamb.

Don't even ask about moving the first few weeks to warm-weather sites. Delaying northern home openers that long is a non-starter, and the southern clubs don't want to burn that many home dates before the munchkins are outta school.

Then again, don't ask the Detroit Tigers about the weather, period. The southern-most city they visit in their first 29 games this season is Kansas City.

For many clubs, it's become beyond clear that in-stadium revenues are a bonus. Thus, if TV is the engine that drives their business, maybe it's time to make contingencies for moving games to neutral sites with domes or warm weather.

It's ridiculous to think that ballplayers can perform at their best in winter conditions. It's even more ridiculous for fans to pay top dollar to endure watching them at the yard.

Worse, when one of the division or wild card races comes down to a game's difference in who makes it and who doesn't, it's a travesty when the sort of game played at Wrigley today will be the determinant.