Published on 4-Aug-2016 by Alan Adamsson 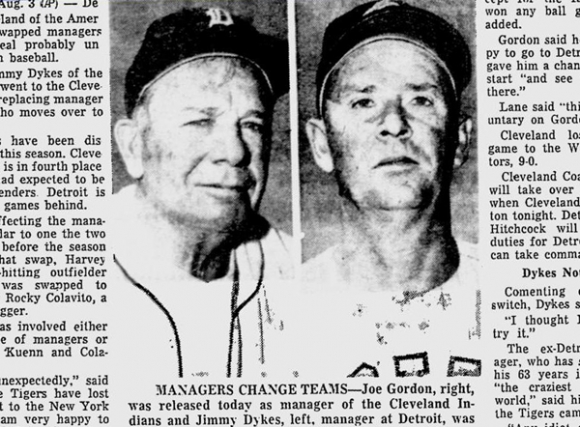 Just when you think the sports world has produced every possible bizarre trade imaginable, they still manage to top themselves:

A broadcaster for a rabbit. And a cartoon rabbit, at that.

But more about that one later. It’s not alone in the annals of creative swaps.

Let’s look at a few of them.

When baseball journeyman Harry Chiti got dealt to the New York Mets for a player to be named later, little did he know that player would be him.

The Cleveland Indians could spare a backup catcher during the early season, and apparently, the Mets saw enough of Chiti afterward.

So, when they later gave a list of players from which to choose in order to complete the deal, Chiti’s name was there. Perhaps their choice said something about the other players, but there can be no doubt that the Tribe got equal value in return.

At least that transaction was a player-only deal, albeit only one player. There were others, but Chiti was the first.

Transactions involving no players have had various impacts on the teams involved.

An obvious example was a swap between the Detroit Tigers and Cleveland Indians. In mid-season, they managed to trade managers.

Jimmy Dykes was shipped to the Tribe, with Joe Gordon moving to the Motor City, making it the only deal of its kind in North American sports history. Both were probably disoriented for the rest of the season, but they’d surely agree that it beat being fired. That's usually what happens when teams want to jettison their skipper.

However, there was a more notorious no-player deal. It might've happened more discreetly, except it affected New York Yankees.

The year was 1972, and while half a decade had passed from The Summer of Love, pitchers Mike Kekich and Fritz Peterson kept its spirit alive.

These dudes and their wives were close friends. Really close. So close, in fact, that during spring training of the next season, they wound up making a trade of their own.

When Marilyn Peterson changed houses with Susanne Kekich, it was news that made more than the agate type in America’s newspapers.

Said Yankees general manager Lee MacPhail, “We may have to call off Family Day.”

A bag of baseballs isn’t nearly as hot for headline fodder. So, when minor-leaguer Tim Fortugno was unceremoniously moved to another team in return for one of those bags, we can only imagine that the amount of $2500 in cash got tossed into the deal to make him feel better.

Much more cash was put on the table in 1919 for an emerging star named Babe Ruth.

The Boston Red Sox had just completed a lousy season, and owner Harry Frazee was sick of Ruth's alleged selfish attitude. So he dumped the slugger by selling him to the Yankees for $125,000 and a $300,000 loan, with Fenway Park serving as the collateral.

It's a myth that Frazee used the proceeds to stage No No Nanette, the sprightly musical that gave the world tunes such as Tea for Two and can still be found up in lights to this day. However, the two transactions are loosely intertwined with Frazee's financial affairs. Still, this is the situation that gave rise to the Curse of the Bambino, which may have affected the Red Sox for so many years, but Frazee ultimately did well by it.

Ruth justified his title as the Sultan of Swat in 1927, becoming the first player in history to hit 60 home runs in a season, a revered record that would stand for 34 years.

That wasn’t the only notable achievement in 1927; Walt Disney also brought the first cartoon rabbit to the silver screen.

Oswald the Lucky Rabbit looked like a rip-off of Felix the Cat, and he probably was. However, cartoon characters were a novelty back then, so Oswald enjoyed a measure of commercial success.

In fact, Disney was certain he could expand the rabbit’s fame if he had a bigger budget, which is why he traveled to Universal Studio’s head office and requested as much.

The studio refused, even showing their power by cutting the budget by 20% and telling Disney to like it or lump it.

Chagrined, Disney quit and decided to work independently. He was certain he could create another cartoon character to help him realize his visions of repeating Oswald's commercial success.

We now see that the empire built around the fame of Mickey Mouse never forgot its origins.

When the ABC network decided to move Monday Night Football to its subsidiary, ESPN, long-time broadcaster Al Michaels decided he didn’t want to accompany it.

He expressed a preference to remain paired with virtuoso analyst John Madden, who left to join NBC, which had acquired the NFL’s Sunday Night Football broadcast rights.

Michaels’ career was launched at the 1980 Winter Olympics in Lake Placid, New York. He exclaimed to the USA ...

That, of course, was when the American hockey team completed the biggest upset in team sports history by defeating the Soviet Union’s juggernaut and paved the way to an improbable gold medal. One of the best in the business, Michaels ultimately moved to the prime time of Monday Night Football and stayed there for 20 years.

NBC saw his addition to their broadcast team as a natural move. ABC saw an opportunity, too, and the idea of a trade was broached.

Dick Ebersol, then-president of NBC Sports, did a double-take. He quickly accepted the trade package for Michaels containing cable rights to golf’s Ryder Cup through 2014 and expanded access to Olympic highlights, but he had never even heard of the cartoon rabbit.

Michaels took being swapped for a cartoon pioneer in stride.

“Oswald is definitely worth more than a fourth-round draft choice,” he said, referring to the compensation that New York’s Jets got for releasing head coach Herman Edwards to the Kansas City Chiefs.

And so it came to pass that the strangest sports trade to date was sealed. NBC got the polished veteran it wanted, while Disney could be hoping their re-acquisition can earn a Comeback of the Year award.

For Oswald, one of these days, it could well to be a brand new ballgame.