Coming Soon to a Phillies Team Near You: Fire Sale II

Published on 7-May-2013 by J Square Humboldt 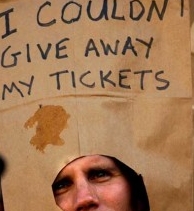 At least the Houston Astros admit who they are.

They have eight wins so far this season. Four came against Seattle. They realize a .250 winning percentage is an exaggeration as they field a AAA club in an attempt to secure their third straight top choice in the amateur draft. No team has ever done that before, and it's one of only two records Houston has a chance of breaking this season.

Maybe the Philadelphia Phillies are in a higher-rent district, but it's time for them to face the same reality.

The Astros are attempting rebirth in another league. The Phillies are the walking dead in a league of their own.

When will GM Ruben Amaro Jr admit it's time to dismantle the team and do an Astro? Is his delay because the 2012 fire sale didn't produce anything but a salary dump? Or is it because his minor-league system looks like the Sahara Desert? There's been talk that Cliff Lee is their best bargaining chip and that he might be enough to lure the Marlins into trading Giancarlo Stanton.

Jeffrey Loria didn't get to be the wealthy weasel that he is by exchanging a $537,000 salary for a $62.5million price tag over three years. Amaro has shown a flair for painting himself into a corner with lotsa-zero contracts for long-in-the-tooth players whose only drug-test results anybody notices is for Geritol intake. The best he can expect is for tight pennant races to develop in other divisions so he won't have to swallow too much salary when teams get desparate for veteran depth.

Odds are, though, Amaro had better have a big appetite, as opposed to Phillies fans who are already sick to their stomachs.