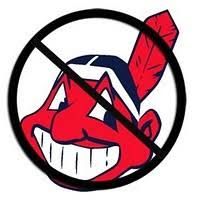 Not long after the dawn of professional baseball, Cleveland got in on it.

The custom of assigning mascots to teams was still an evolving practice, and it wasn't uncommon for teams to change them like yesterday's socks.

Inspiration for those names came from everywhere.

That's basically where Cleveland was, so they started using versions of managers names. They were the Naps for Napolean Lajoie until he left and the Molly McGuires until Deacon McGuire left.

So that wasn't working.

Finally, in 1915, the team owner asked four sportswriters to get together and come up with something. They chose Indians.

In fact, no one really knows anymore what they were thinking or why.

One version has it that Cleveland's one-season wonder -- the Native American Louis Sockalexis -- was being honored with the name.

The reality is beyond murky.

The other reality is for a few decades, now, some Native Americans -- remember, real Indians are from India; Columbus landed in the New World and thought he arrived in the subcontinent -- are offended by Cleveland's mascot.

Their campaign has been relentless, and now The Commish has had his way with Indians' co-owner Paul Dolan. Kinda.

The name stays. The logo goes.