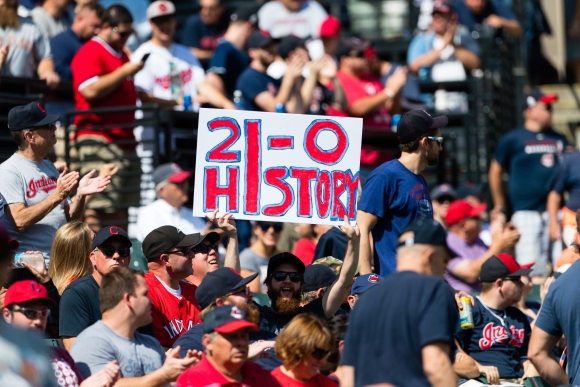 Manager Terry Francona's crew has done its bit for history.

Now, it's down to the seamheads to figure our exactly what it was.

There's absolutely no doubt about one achievement:

It came at the expense of the Detroit Tigers, who almost became only the fifth team to lead after an inning during the Tribe's torrid run.

They'll also be the only dudes who truly know if they purposely took revenge on an umpire, but for the record, pitcher Buck Farmer hotly disputes it.

Cleveland was so methodical in this 5-3 victory, the incident in question was one of the more intriguing highlights:

If the Tribe wants to put the nitpicky issue of who hold the longest-ever MLB winning streak, they'll have an even more daunting challenge:

Back in 1916, the New York Giants went 26 games without losing. That's because of a 19-inning tie that was called due to weather.

It was made up the next day, but as was the practice back then, both sets of stats counted.

At least, that's what the Elias Sports Bureau says, and as MLB's official stat geeks, they're sticking with it.

Maybe Cleveland's current feat doesn't warrant popping champagne corks yet, but that doesn't mean there aren't other ways to celebrate.

One never knows what the next game will bring, so go for it now.