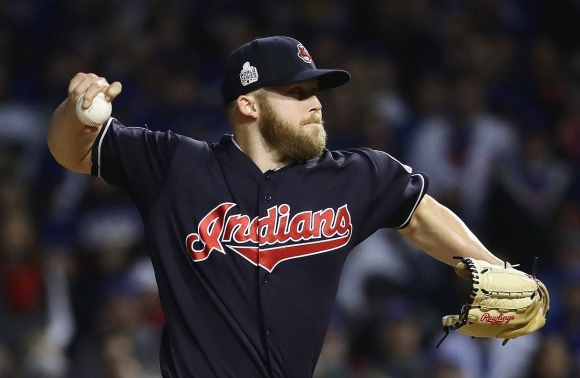 It's not like the Indians' pitching staff is the 1965 Dodgers reincarnate.

But at the rate their slingers are going, they could wind up being better.

Back then, Sandy Koufax hurled himself into immortality with shutouts in Games 5 and 7.

In this year's Series, the Tribe staff's trending in ominous ways:

The latter fact, of course, includes this Game 3 gem:

Dudes have made their own breaks.

Meanwhile, while the mantra du jour is the Indians are up in the Series, 2-1, with two Kluber starts to go, it's worth noting that Cleveland's playoff record this year is 6-1 in games he doesn't start.

Conversely, the Cubs would be better served to swing at pitches in the strike zone. Yes, John Hirschbeck staked out a wide swath in Game 3, but over-agression's been a constant plague for them in this Series.

The Indians' moundsmen don't really need extra help. However, they would appreciate a bit more support than the 35 runs in 11 games their offense has given them so far.

It's incredible that, with the wind blowing out in one of baseball's most hitter-friendly parks, there was only one extra-base hit in the game, and even that was a misjudged triple when Cleveland's Lonnie Chisenhall got fooled by the gusts.

Right now, most of the fooling is happening at the plate. Indians hitters are doing just enough, but if the Fuzzies are gonna keep this thing going, in Game 4 and beyond, they'd better be the first team to wise up.