Clayton Kershaw Isn't an All-Star and Everything Hurts 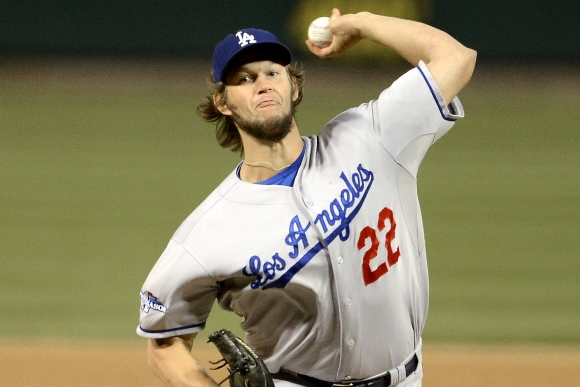 Final Vote sounds more like the last dying breath of democracy than a feeble attempt to wring all the juice out of baseball fandom's rag.

Or maybe it's an Independence Day sequel!

Regardless, when the best pitcher this side of Sandy Koufax can't get elected to the team on merit alone, we have further proof that the system is broken. Play it again, Sam: Major League Baseball can't get this All-Star Game right.

Clayton Kershaw, reigning NL Cy Young as well as the league MVP, is currently ranked third out of the five candidates for the final spot on the All-Star roster.

Cases can be made for all of them, of course, but none would state that they should play in Cincinnati come Tuesday while Kershaw chills at home with his way-too-young-looking wife.

Admittedly, Kershaw is having a terrible season when measured against baseball gods: a pedestrian 2.85 ERA (11th in the NL) with only 160 strikeouts (1st in baseball) in 123 innings (one-third less than the league leader). It's not like he's leading the league in strikeouts per nine innings or is near the top in strikeout-to-walk ratio.

It's truly unforgiveable that Kershaw is in this position. This is like keeping Michelangelo out of the Sistine Chapel because the cleanup crew couldn't get all the paint out of the floor tiles.

Just because the Dodgers have been shoddy at providing their ace with run support doesn't mean the lefty should be relegated to this runoff stuff. In 18 games started this year, Kershaw's had four or more runs in his favor just eight times.

Cueto has eight such starts himself, albeit in 16. Cueto also plays for the host Reds and is in the Final Vote lead, so figure that conundrum out if you can. I'll wait.

I could live with Cueto winning this battle, since he didn't really come that close to besting Kershaw where it counts, namely in last year's Cy Young voting. Besides, it may be his last start in his hometown.

As much as is made about the Kansas City fan base, the so-called Best Fans in Baseball -- for an opposite viewpoint, see Bill Murray, Cubs fan -- turn out in numbers, too. Thus, it's no surprise Carlos Martínez vaulted to the top spot for now after notching his 10th victory in a key win over the red-hot Pirates.

Besides, it's not like the Dodger ace is going to start this game, a nod that's like going to that hetero-chromatic hurler Max Scherzer. You can't tell me that it wouldn't be thrilling to see him follow Scherzer, though. Those two in tandem would be a sweeter 1-2 combo than anything Sonny Liston ever threw.

Well, OK. Except for that fight.

I believe that Kershaw deserves to win the Final Vote, and I can't imagine that any fan who has an IQ greater than that of an ocelot would disagree.

Then again, the cross-section between baseball enthusiasts and complete morons -- a growing portion of the fanbase -- proves me wrong every single time.