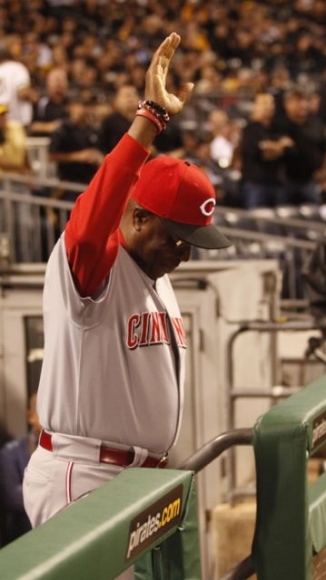 As plodding but efficient baseball managers go, Dusty Baker had risen far above the pack.

He ran winners in San Francisco and Cincinnati.

Yes, he couldn't do much with the Cubs. But they're the Cubs.

With toothpick in tow, Baker established a cozy place for himself near the baseball bank that he was so cautious not to break.

Unfortunately, the Reds believed he'd become too cautious. Too predictable

Right about this time last year, farseeing pundits such as myself were questioning the prudence of the Reds in dumping their wise and wooden manager.

While it was is painfully obvious to the legions of fans who follow the teams that Dusty managed that Baker’s soufflés always folded, at least for a time, they could entertain the notion that their small-market club actually had a shot at the big time.

It’s true that whenever Dusty’s teams made it to the big show, his saucy regular season savvy seamed to seep out of the sieve.

With the 2014 baseball season in the books, the Cincinnati Reds finished 76-86, good for fourth in the NL Central and 14 games out of first.

Who knows? If Dusty hadn't stuck up for that expendable coach of his, he might still have a job today.

Right now, Reds fans may feel like it might have been better to at least flirt with fame and fortune rather than to flounder with the other dead-in-the-water franchises.