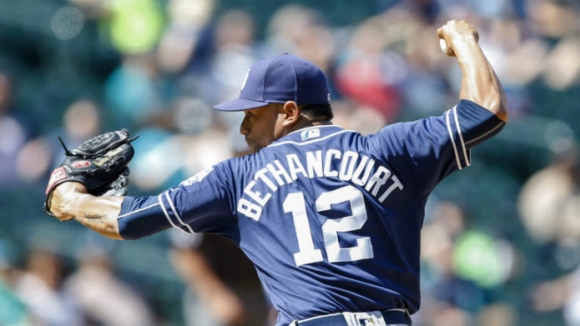 Versatility in baseball is becoming more and more in vogue.

The ability to play multiple positions only serves to increase a player's value.

In the case of Christian Bethancourt, this is particularly true.

The San Diego Padres have created a Swiss Army ballplayer, and they're not afraid to use him if provoked.

Bethancourt is a catcher by trade, but can also apparently play other positions in the infield and outfield.

After a few novelty pitching appearances last season, Bethancourt worked as a pitcher in the off-season and made the team as a reliever.

The Padres wasted little time getting their secret weapon involved, as Bethancourt pitched in relief on Opening Day.

Our hero entered the game against the Dodgers down, 7-1, and things got much worse.

There were two wild pitches, a three-run homer, and other shenanigans.

He even got spiked covering home after one of the aforementioned wild pitches.

Bethancourt managed to get four outs and left the game with a robust 20.25 ERA.

It's only one game, and this bold experiment should be allowed to play out.

The dude can pitch.

He has also topped out at 96mph, so the arsenal is diverse.

If only there was a way he could catch himself.

We just don't have the technology.