Chris Christie Enjoys a Day at the Ballpark 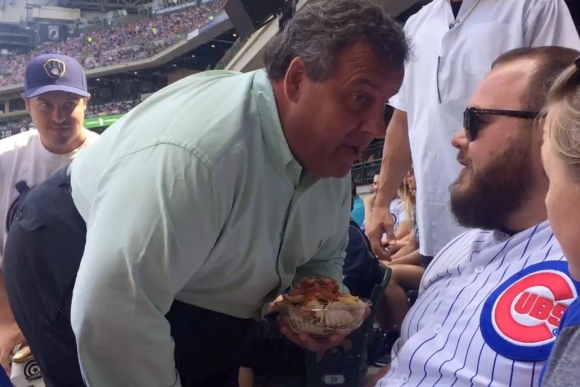 Let's just put it right out there.

Chris Christie isn't the most popular dude these days.

The beleaguered New Jersey governor has seen his approval ratings plummet due to a series of goofs and indiscretions, and as a result, he really doesn't seem to care about public perception any longer.

The former Trump surrogate does like to take in a ballgame every now and then, but he can't seem to do this without causing a ruckus.

Here's Christie at a Mets game a few weeks ago:

Apparently, he was showered with boos after making that grab.

The portly governor enjoys sitting amongst the people, so this sort of thing is gonna happen.

Recently, Christie was at Miller Park to watch the Cubs and Brewers throw down, and wouldn't you know it, he was being mocked relentlessly yet again.

It appears the failed Republican presidential candidate took exception to one Cubs fan in particular:

Suffice it to say, he wasn't offering the fan some of those nachos.

It turns out the fan in question had called Christie a hypocrite, a description that happens to be right on the money.

The aspiring sports talk show host tried to explain his side, suggesting that public figures shouldn't have to just take all of this abuse.

While technically true, an exception should probably be made for Christie.

Anyway, it appears our new national pastime is now trying to make this obese Republican angry in public, so make sure to look for Christie at a ballpark near you.

You can't miss him.