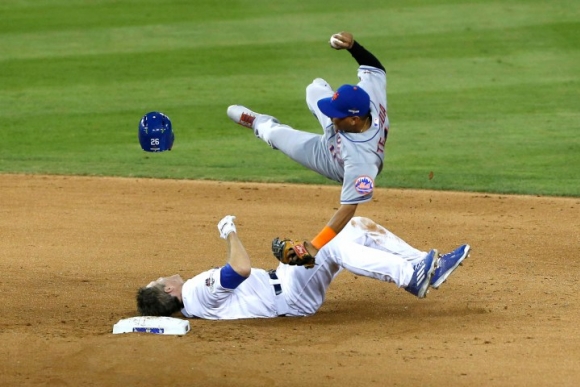 In a best-of-five series, losing the first two games at home does not portend to a long playoff run.

And that's what the Los Angeles Dodgers were facing.

Down, 2-1, in the seventh inning and facing a stingy New York Mets pitching staff, it was clearly a time of desperation for the Bums.

Chase Utley's pinch single put runners at first and third with one out and the versatile Bartolo Colón entering for a rare relief appearance. He induced Howie Kendrick to stroke an easy grounder up the middle. Then this happened:

In true just-the-facts-ma'am style, video review only considered whether Utley was safe or out and ruled Tejada never had contact with the base. Ergo, Utley was safe, even though he never touched the base.

The Mets are doing more than that, although captain David Wright kept it on a diplomatic plane:

The hardest facts are Los Angeles won the game and Chase Utley is a replaceable part. Sorta like a pawn knocking out a knight. Or something like that.

No matter how his slide is perceived -- and no matter what MLB does or doesn't do -- this series has changed, in both tone and talent.