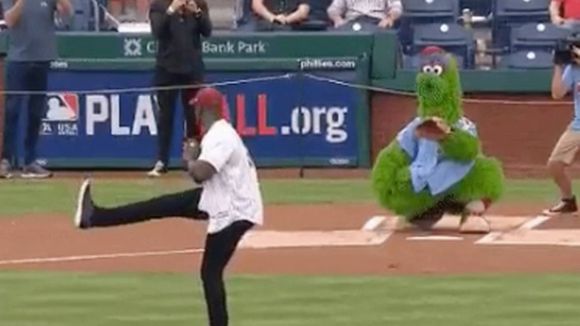 Baseball is a game of many traditions.

One of the more time-honored and entertaining would have to be the ceremonial first pitch, which is often wrought with drama and intrigue.

Well, another stirring chapter to this lore was recenty added before a Philliies game against the Giants.

.@Phillies, I think somebody deflated my baseball ⚾️ pic.twitter.com/Gj6nkU2ShN

Man, that is rough.

The current host of the NBC ratings juggernaut American Ninja Warrior was presumably trying his best, but the results left a lot to be desired.

That unusual leg kick suggested the possibility that KGB knew what he was doing, although that thought quickly evaporated shortly after the ball was released.

We certainly can't blame the Phillie Phanatic, who provided a nice target behind the plate.

Of course, every poor ceremonial first pitch from now until the end of time will be compared to this 50 Cent masterpiece.

Yes, just a bit outside.

And here are nine more abominations for good measure.

As long as celebrities and athletes from different sports are put into these awkward positions, this theater of the absurd will continue to amuse us.