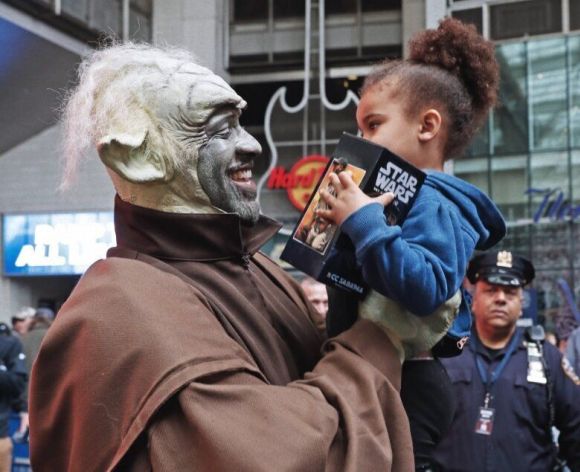 The Star Wars phenomenon is about as permanent a fixture in pop culture and society in general as, well, baseball.

So it seems perfectly natural for the two cultural institutions to become intermingled in some way.

And what better time to do this than on 4 May, which is a date on the calendar where it's socially acceptable to show up at the office dressed like a storm trooper or one of those weird-ass creatures that Luke and Obi-Wan encounter at that cantina on the planet Tatooine in A New Hope.

Apologies for the digression, but you get the idea.

If you happen to be CC Sabathia, though, you just might show up to work as the wise and diminutive Yoda.

Of course, when the 6ft 6in Yankees starter does his version of Yoda, the character takes on different dimensions.

Happy Star Wars Day, Yankees fans! May the fourth be with you! pic.twitter.com/JjNVcf03Wa

The force is most strong with this one.

Well, CC did a hell of a lot more than just try, getting all dressed up to assist with the distribution of his very own Star Wars-themed bobblehead.

Did that video make anyone else vaguely uncomfortable?

Clearly, Sabathia completed his Jedi training and became a Master long ago, recently becoming the latest player to join the prestigious 3000 K Club, which affords members priority seating pretty much anywhere they please.

As the announcer helpfully explained, CC is only the 17th player in MLB history to accomplish this feat, so that's pretty cool.

Despite this remarkable achievement, fans seemed more excited about the Yoda thing.

We don't have to imagine it, Spencer.

Fresh off his 3,000th strikeout, here's NY Yankee CC Sabathia as a tall yet legit Yoda. May the 4th be with you. #StarWarsDay pic.twitter.com/ES1C3dIQqA

Seriously, Star Wars cosplay at CC's place is a thing that needs to happen.