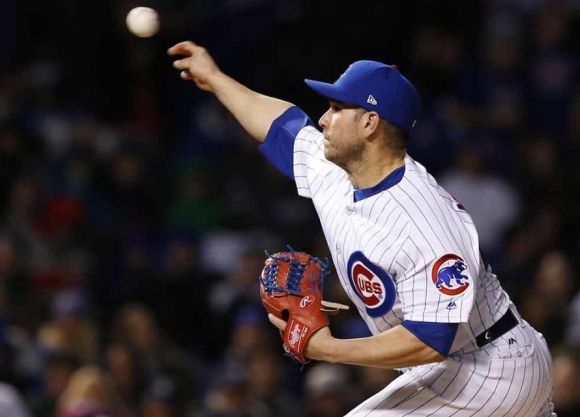 When a position player finds himself on the mound in an MLB game, you know something's gone horribly wrong.

This was the case this past weekend in Chicago.

The Cubs spotted the Yankees five runs in the top of the first inning, effectively sucking all the drama out of Wrigley Field.

The Yankees eventually won the game 11-6, but not before a surprisingly entertaining ninth inning.

Through a combination of boredom and necessity, Cubs manager Joe Madden asked backup catcher Miguel Montero to scale the bump and try to get three outs.

The aging veteran accepted the challenge.

Clearly, Joe Buck and John Smoltz were enjoying themselves.

And so were the fans who stuck around Wrigley to the bitter end, as Montero somehow managed to record three outs without allowing any runs.

Unfortunately, the three Cubs pitchers who went before him were not as fortunate.

We saw a little bit of everything here, including Miggy forgetting to cover first base on a potential double play, as well as a pitch thrown behind the Yankees' Chris Carter, a development that frightened Montero more than it did Carter.

Dude did walk two in the inning, but his strategy of allowing the Yankees to hit the ball really hard right at people worked to perfection.

He even tipped his cap as he left the field, much to the delight of the Wrigley faithful.

This was not Montero''s first rodeo, as he was called to action last season against the Mets in New York.

Not a lot of deception in that delivery.

This sort of thing happens more often than you'd think, but it never fails to elicit giggles.

Baseball is a silly goose.