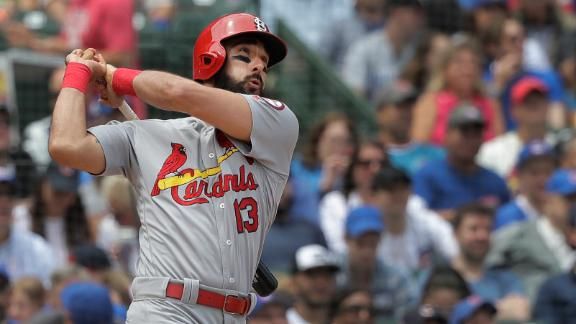 The vaunted Cardinal Way has eroded into a few potholes and taken a few dead-end detours the past three seasons.

It refers to the way a club that leans on tradition by necessity survives and -- based on their history -- thrives.

As evidence, St Louis has earned more World Series titles -- 11 -- than any other team except the New York Yankees.

These days, though, Cardinal Nation is doing more imbibing than spraying. Frustration will do that.

If it weren't for the Redbirds picking on Cincinnati's then-hapless Reds at the season's start -- 9-0 to start 2018's campaign -- they would've been underwater by the time they fired manager Mike Matheny just before the All-Star break.

Indeed. His quote in The Athletic didn't do him any favors with management or the players.

Jedd Gyorko loses a routine pop fly foul ball in the sun..... with his sunglasses on his hat. pic.twitter.com/Du4EcbbUQx

Mired in the NL Central's midst, if the Cardinals are gonna make any run at avoiding a third straight playoff-free season -- in your dreams, Seattle -- someone's gotta step up to light the way.

It may be a futile gesture, but St Louis stalwart Matt Carpenter is doing it.

With his eighth bomb in the Cardinals' last six games, the former TCU Horned Frog has tied Mark McGwire for the team record:

If Billy Hamilton hadn't gone all Spider-Man the game before this streak began, Carpenter woulda had the team-record streak all to himself.

Not only that, in the Cardinals' 18-5 romp over the Cubs, Carpenter racked up three dingers to go with a pair of doubles in a 5-5 performance that all happened in the first six innings.

Incidentally, Carpenter and new skipper Mike Shildt mutally agreed to call his day a day after that.

Chicago manager Joe Maddon decided to save his arms, so he tossed position players onto the mound for the final three innings. It gave a chance for St Louis reserve Greg Garcia to become the ultimate trivia question.

Dude went deep on Tommy LaStella, and had he done so in his next at-bat -- against Victor Carabini -- he woulda become the only player in human history to launch bombs offa two position-player pitchers in the same game.

Nope. He flew out.

Shildt's a Cardinal Way sorta dude. He's a baseball lifer who's been in the St Louis system for years, winning three minor-league titles along the way.

Odds are he'll stabilize the lineup -- Matheny was a tinkerer -- but he's gonna need more than Carpenter to get hot for the Cardinals to dig outta the hole they're currently in.