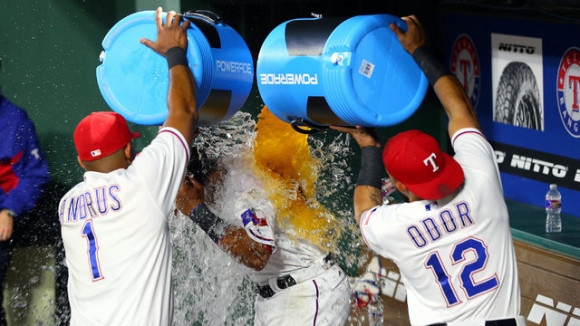 Hitting for the cycle is one of the more unique accomplishments in baseball.

This feat obviously requires skill, but also a bit of luck.

Not only that, dude dedicated the second one to his son on his birthday.

The Rangers centerfielder rode the cycle against the Angels this past Saturday, which just happened to be his kid's special day.

Dad delivered the goods, doubling and singling in his first two at-bats before getting the elusive triple out of the way in the fifth inning.

Of course, that left the homer.

Riding the cycle isn't supe- rare, as it has already happened three times on the young season.

However, Gómez is only the 31st player in MLB history to do it two or more times.

Dude had promised his kid something good during the game, so this certainly qualifies.

However, it's best not to be specific with such things.

Two is better than one, though.