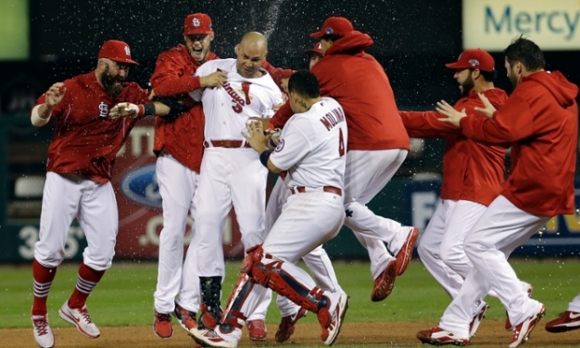 Every year it seems as if Carlos Beltrán flys under the radar.

Yes, late in his career and with bad knees, he's now only an above-average outfielder, but he still has a cannon for an arm. He's been an All-Star throughout, but it always seems that fans in general don't recognize his achievements until the post-season stumbles around.

When it comes to the playoffs, Carlos Beltrán has certainly earned his stripes. A career .283 hitter during the regular season, Beltrán seems to step it up when it matters during the post-season. His current average is .345, and it only seems to be trending upwards. His 16 post-season homeruns -- in 39 games, mind you -- has placed him eighth on the all-time post-season homerun list.

He recently passed Babe Ruth with his 16th post-season bomb against the Pirates during the NLDS. If a player mentioned in the same breath as Babe Ruth when it comes to hitting, he certainly deserves recognition for his valuable contributions. (Of course, the Bambino only had World Series in which to play; he'll still be recognized for being the gold standard for records limited to that level of post-season alone.)

Although Beltrán still has a relatively small sample size -- only 164 postseason plate appearances -- you can certainly call him Mr. October 2.0, or more appropriately for his heritage, Señor Octubre. Reggie Jackson earned that moniker with his unbelievably consistent post-season excellence with the Yankees, and now we are witnessing a modern day Reggie Jackson, and one that can be a star in the field as well; that's something to which the Dodgers will attest. Last night, his arm saved the game:

What I just analyzed was validated last night with his walk-off single to earn the Cardinals a Game 1 triumph in their NLCS battle with the Dodgers. I don't know if his focus is more concentrated during the playoffs or if he just loves the additional pressure. Some players have that innate ability to enhance and improve their game when it matters, and Beltrán exemplifies that. Any baseball player will tell you, Carlos Beltrán is a threat any time he's on the field.

Ironically, the only time he didn't come through on the big stage was against the Cardinals. That was in the 2006 NLCS, Game 7, when the Cardinals and Mets took the drama down to the wire. Beltrán was victimized by Adam Wainwright's now-famous 12-to-6 curve. But ever since, Señor Octubre has made much better memories for himself and his current team's fans.

And most likely, there will be more memories to come.