Cards in World Series with Help from Dumb Bum Decisions 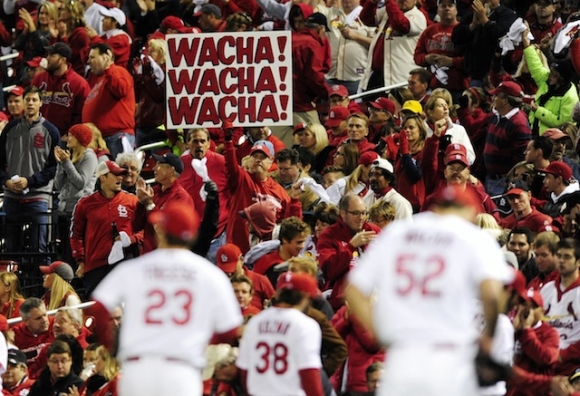 Make no mistake. Rookie righty Michael Wacha was the MVP of the National League Championship Series.

And Carlos Beltrán earned his way into the first World Series of his career as the St Louis Cardinals won their 19th NL title with a 9-0 smashing of the Los Angeles Dodgers to take the set, four games to two.

It was a convincing performance all the way around by the Redbirds. With the exception of John Jay needing a compass in Game 3, St Louis prevailed in all aspects of the game. This was especially evident in managerial moves.

Mike Matheny pushed all the right buttons for the Cardinals. Well before the playoffs, he set up his army of rookies to succeed. Matheny slotted young, flame-throwing relievers into bullpen roles that were ideal for each of them. His young starters were well-steeled for the pressures on a post-season rotation. He kept his bench fresh, as exemplified by Shane Robinson's key contributions -- 2-for-4 with two RBIs --  in the clinching contest.

In contrast, Dodger skipper Don Mattingly added ample evidence to the issues that almost got him fired in June, before Los Angeles got healthy, got Yasiel Puig on his good days, and got on a roll.

Mattingly's consistent choosing of the wrong options throughout this series manifested itself in spades last night. Among them:

Ace or not, Kershaw went into Game 6 with an 0-4 record and a 5.09 ERA against St Louis this season. On top of that, Kershaw wanted to pitch with only three days' rest against Atlanta in the previous series; he'd not done that all season. Mattingly obliged his star hurler without even considering what the routine change might mean down the road. Was it a reason his fastball's velocity dropped so early in Game 6? Well, it's the first time that happened all season.

How many clues did Mattingly need?

St Louis is moving to the World Series with deft molding of the 17 home-grown players on its roster. Los Angeles is going home by deferring too much to its star players. The irony is rich.

Almost as rich as its mind-boggling $239million payroll.