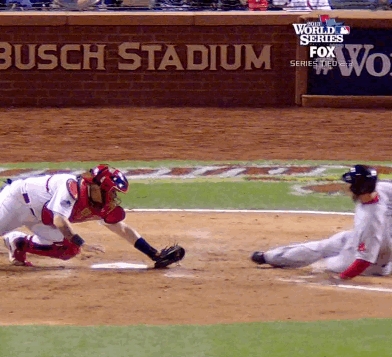 MLB's poobahs have finally come to terms with making high school baseball's slide or avoid policy their own.

The professional game has now officially introduced Rule 7.13 into its code.

That probably means MLB won't use this clip as a promotional vehicle anymore:

Team owners just aren't excited about high-priced players risking long stretches on the disabled list. For example, the St Louis Cardinals had Yadier Molina and his 5-year/$75million contract available for the World Series last season, but he was fortunate to be there after this play in late August:

Molina was fortunate to avoid a concussion, but even his battle-hardened view of the play called into question whether or not it was justified.

And with that in mind, the Cardinals adopted their own organizational policy of avoiding contact at the plate. Basically, they'll instruct their catchers to handle plays there like first basemen. Ironically, Molina had pioneered the technique during the 2011 World Series with Texas, and it had already become a teaching vehicle for young catchers:

There are still vagaries to Rule 7.13, and it may well be that the risk of injury is now greater on the runner barrelling toward home plate.

But that's for the data crunchers to determine during this season and beyond. Meanwhile, St Louis has opted for its own definitive solution to home plate collisions, which seems like a much more common sense approach to the issue than Rule 7.13.