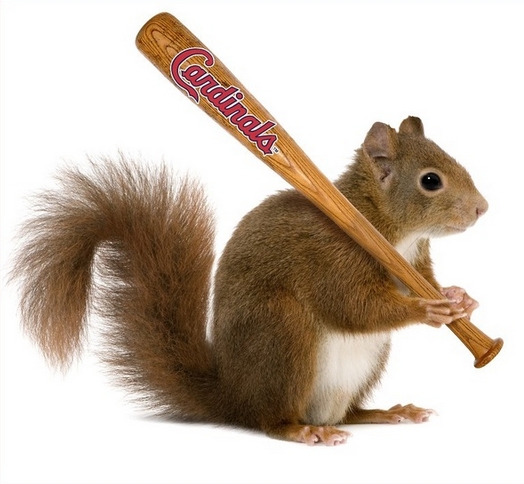 There seems to be a connection between animals and professional sports comebacks.

Search the phrase rally animal and see how many results pop up.

You won't see the Chicago Cubs' goat, of course. It was the anti-rally animal.

But two outta three of these critters achieved legendary status:

Specifically, there seems to be a strong relationship between the game of baseball and these so called rally animals.

In addition to those mentioned in the video, don't forget -- try as you might -- the Mets Rally Parakeet.

Last night in Busch Stadium, we witnessed the newest member of the zoo: the St Louis Cardinals' Rally Cat.

Did you notice those tufts of fur at the tip of its ears? Could it be the little fella's related to a bobcat?

The groundskeeper wouldn't disagree. That first bite needed a hospital trip to stop the bleeding.

Somewhere, real bobcats must be proud.

Confusion reigned after the groundskeeper entered the tunnel.

He said he set the Cardinals' newly designated good luck charm down near the Stan Musial statue just outside the stadium. A lady who claimed to be into private cat rescuer picked it up with the intention of going home and caring for it.

Except the cat made a run for it.

Currently, there's still an APB out for the Rally Cat.

As noted, this wasn't the first time the Cardinals benefitted from the intervention of a furry friend.

Many a baseball fan will remember the Rally Squirrel, who jumped onto the national stage during the 2011 NLDS against the Phillies.

The Rally Squirrel would see St Louis go on to win the 2011 World Series.

It's likely only Cardinal Nation remembers that their team squeaked into the second wild card slot that year on the last day of the season.

They then proceeded to benefit from the most liberal infield fly call ever to beat Atlanta and set the stage for Mr Squirrel.

With St Louis sweeping Kansas City in the two-home, two-away Show Me State series, they're now only one game behind the first-place Cubs, coincidentally hosting a sub-.500 Atlanta club with Chicago's down in the desert facing the dangerous Diamondbacks.

Maybe the Rally Cat can help recapture the magic of his Rally Squirrel brother.

With that being said, the team needs to make sure to keep the Rally Cat away from club mascot Fredbird.