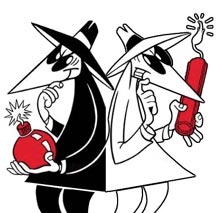 The Cardinals and Browns met in the World Series.

1944 was when America's sweetheart -- pre-addiction version -- proclaimed that St Louis was where everyone should be:

But this is 2015, and it has a different tone in the Gateway City.

St Louis deserves better than the Rams, so to hell with them. But waving buh-bye to TJ Oshie sorta stings. Dude's been
The Face of the Blues in recent times, but unfortunately, he's also been The Hand. No rings on it. Now, off he goes to the Capitals.

And then there's the crown jewel of St Louis' sporting scene. It's had a murky two weeks off the field, and the muck just got an extra stir:

Note that Correa's hacking mentioned in that report is not what the FBI is investigating. And his attorney came out swinging, according to the St Louis Post-Dispatch:

Very little is cut-&-dried in hi-tech, and this one's going down the same path.

It's clear Correa and staff-to-be-named-later were positive Jeff Luhnow & Co took proprietary elements of the custom-build Redbird player information data base to Houston. So he checked.

If he'd found something improper, why didn't he report it in some arcane manner to his higher-ups?

This all harkens back to an incident not so long ago when a reporter in the Cardinals' clubhouse asked Mark McGwire what that jar in his locker contained.

St Louis is a smaller market than Oakland and Tampa Bay. The Cardinals generally operate on a player payroll that ranks a level below MLB's big spenders. One reason they're able to do so is the region's fans understand their role in the financial scenario and step up, season after season.

Hopefully, for their sake, the team on the field will keep delivering and add to the lore that goes back to 1944 and beyond.

The team off the field, however, needs an ethical realignment. And it starts at the top. If the ownership and general manager John Mozeliak weren't so tolerant of open discord within their office staff, perhaps this trainwreck would never have gone so stupidly off the rails.