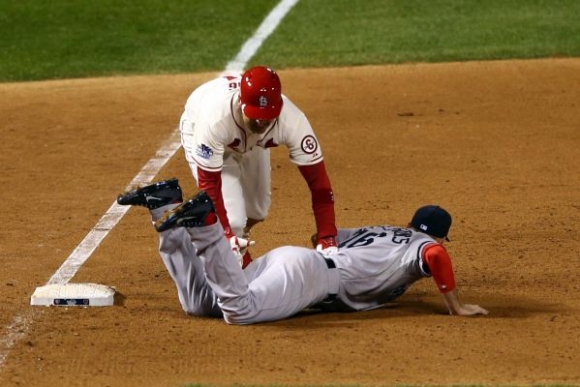 The Boston Red Sox lost a World Series on a poor decision by the umpire.

It happened to be in Game Three, in the 10th inning of a 5-5 game against Cincinnati's Big Red Machine in the midst of its heyday. Cesar Geronimo had singled for the Reds, and pinch-hitter Ed Armbrister laid down a poorly-executed sacrifice bunt that bounced high in front of the plate, making it easier for Boston catcher Carlton Fisk to barehand the ball and start a key double play.

At least, that would have happened if Armbrister didn't run a bit of interference. Literally:


One can only assume that plate umpire Larry Barnett had a lapse in concentration. Baseball's rules clearly stipulate that "interference is an act by a member of the team at bat which interferes with, obstructs, impedes, hinders or confuses any fielder attempting to make a play."

Barnett blew it. Armbrister wasn't called out, and Geronimo wasn't ordered back to first. The stage was set for Joe Morgan to single home what proved to be the winning run, and Cincinnati ultimately won the Series in seven games.

The Red Sox also lost a World Series on an error.

In 1986, Boston was one out from winning its first Series since 1918 and razing the Curse of the Bambino. Grizzled veteran Bill Buckner had been a season-long key to the team's success, and although he was usually replaced at first base in the late innings for defensive purposes, he insisted that he be on the field for this glorious occasion of triumph. Manager John McNamara's moment of sentimental weakness now lives in infamy. That historical out in Game Six never came.

It was the last time a World Series game had ended on an error.

Because the defense was ruled to be at fault, the actual call was obstruction. It's Rule 7.06, defining obstruction as "the act of a fielder who, while not in possession of the ball and not in the act of fielding the ball, impedes the progress of any runner."

The video clearly shows Joyce observing the play with his hands down, until Will Middlebrooks raised his feet for no other logical reason. This gave Joyce due cause, he gestured his call, and that meant all the injured Allen Craig needed to do to seal the deal was make it a close play at home.

He did, justifying Joyce's judgment in the mind of plate umpire Dana DeMuth, who pointed toward Joyce and then gave the safe signal.

In what was generally predicted to be an intensely close World Series, it remains to be determined how pivotal this play will be.

Just know the karma here won't come down to Joyce or DeMuth. Boston violated the universal unwritten rule of sports: Never leave the result of a play to an official's judgment.

Red Sox catcher Jared Saltalamacchia should never have made that throw to third.