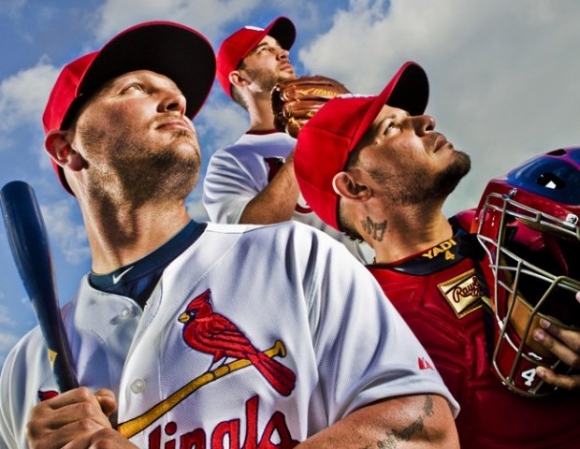 St Louis can duck and dive with the best of them.

The team that virtually everyone expected to emerge as NL Central champions in 2014 was favored because of their younger players performing beyond their years, their record-breaking 2013 offensive stats, their rock-solid pitching, and the mere fact that they were the NL titlists as a result.

The fact that virtually none of that carried over to 2014 hasn't seemed to stop them. Or as least, keep them from hanging around.

In fact, yesterday was the first time all season that the Cardinals held sole possession of first place in the division.

It helped that Matt Holliday came to life against the Chicago Cubs in the previous series. Among other things, the left fielder went 3-4 with a bomb and four ribs Sunday to key a 9-6 comeback win and position the Redbirds' return to the NL Central's top perch.

Now, the team with the best September record since 2011 -- 53-28 -- is finally getting healthy. This past weekend, Yadier Molina returned from a thumb injury that's sidelined him since just before the All-Star break. And now post-season hero Michael Wacha will re-join the rotation this Thursday against the Milwaukee Brewers.

And if the Brews' enduring a six-game losing streak coming into tonight's action isn't bad enough, now they're coping with key injuries. Carlos Gomez, their irascible thumper, has just gone down with a wonky wrist. Not what they needed to hear with the Cardinals coming to town.

The NL Central hasn't exactly set a torrid pace. St Louis now leads it with a .540 winning percentage -- 74-63 -- which is the lowest among MLB's six division pacesetters. But as they were the latest to prove in 2011, it's not the best record, it's making the most of opportunity that counts.

And that, more than anything, is the real Cardinal Way.