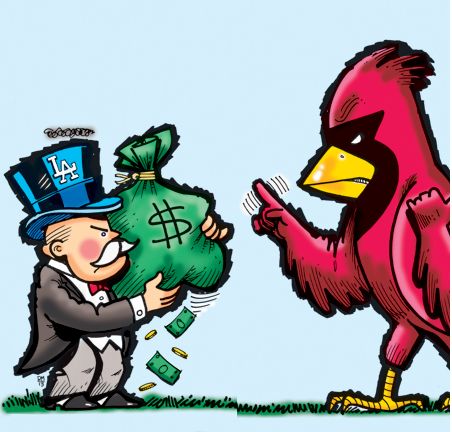 Los Angeles closer Kenley Jansen didn't know at the time how ironic his declaration was:

If it goes, it goes.

While dude was talking in existential terms about his finicky heart, he might as well have been referriing what the St Louis Cardinals were doing to his pitches in ninth innings when the rubber met the road.

In short, they went. Far.

Jansen's troubles weren't the sole reason the Bums got swept outta their own yard by the rejuvenated St Louis Cardinals. They just happened to be the last memory -- one growing in frequncy -- burned into the minds of stunned teammates and fans alike.

Cardinal pitching, defense, and timely hitting shut down the Dodgers, who were inconsistent and/or insufficient in all three of those phases:

As a result, Los Angeles and their $194million payroll have now dropped 4½ games off the NL West pace and 3½ adrift of the second Wild Card spot.

Meanwhile, if the AAA Memphis Redbird alums wanna have an October reunion, they may need to do it in the Gateway City.

Besides DeJong and Harrison Bader -- as well as Patrick Wisdom, who's impressed in his short stint as a Cardinal -- there are nine others with the big club now or have spent time on it as the St Louis brass shuffles its roster to fit the occasion.

And missile-launcher Jordan Hicks made the jump from A+ ball.

Their local pipeline has allowed them to surge back into post-season contention for $100million less than Los Angeles.

With interim manager Mike Shildt holding various roles -- including being a skipper -- in the Cardinals organization in recent years, he knows those players well.

Toss it all together, and the revamped Cardinals are 24-5 since Shildt took over. Dude's done it with moves like installing Carpenter in his coveted leadoff spot and following with Molina in what has got to be the slowest-running 1-2 combination in the history of MLB baseball.

There is that, and it's working.

As hot as they are, the Cardinals are still 2½ games behind the Cubs in the NL Central. They're a half-game ahead of the division rival Milwaukee Brewers in the Wild Card chase with slightly more than a month to go, so it's not time to lock in any feelgood stories yet.

And if anyone's thankful for that, it's those suddenly bumbling Dodgers who entered August badly and have yet to do anything meaningful about it.