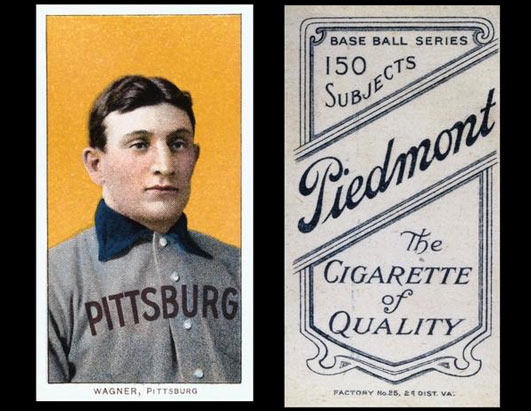 Some say Honus Wagner was the greatest shortstop of all time.

The sabremetrics crowd used the increasingly popular WAR rating to justify this claim. Like any other credible stat, it is based on a player's performance relative to his contemporaries. It's really the only measure that makes sense. There is still no objective way to compare eras.

However, there is one all-time comparison that is indisputable, and there, Wagner is in a league of his own.

One of his mint-condition T206 baseball cards just sold at auction for $2.1million. Yes, that's a record.

No wonder it's called the Holy Grail of collectibles.

Only 57 copies of the card are known to exist. In the early 1900s, baseball cards were promotional vehicles for cigarette companies, and the monopolistic American Tobacco Company had cornered the market on them. Unfortunately for the company, it had also cornered the market on tobacco, which led to its dissolution via anti-trust action by the Supreme Court in 1911. Until that time, its policy of producing baseball cards had served it well and padded pocketbooks of many a Hall-of-Famer to be.

Except Honus Wagner. A non-smoker who was well ahead of his time in that respect, he objected to his image being used to promote cigarettes. American Tobacco allegedly only printed cards after signing contracts with the players involved, but Wagner claimed he never inked any such document. Whether American Tobacco jumped the gun or not, they clearly ceased and desisted after his protestations, and a collectible rarity was born.

Baseball cards had their heyday as solid investments in the 1980s, often being cited as generating the highest return on investment of any commodity during that decade. Disturbing scenes of speculators crowding kids aside in souvenir shops were not unusual, as they scarfed up entire boxes of new cards, often leaving the youngsters without, when all they wanted was one or two cards of their current heroes. Maybe these episodes weren't what sent Gordon Gekko to jail in Wall Street, but many parents at the time would have cheered if a few of the card hoarders could have found their way into a cell with him.

Wagner's playing contract with the Pirates earned him $10,000 in 1909. At today's rates, that would work out to approximately $3million. That wouldn't put him in the top ten for 2013; it's doubtful the most blinded Oriole fan would dare to mention JJ Hardy and his $7.4million salary -- the tenth-ranked shortstop on that list -- in the same breath as Honus Wagner.

This is yet another justification why Marvin Miller should be in the baseball Hall of Fame.

And the best that Hardy's card will ever do is make noise as the bicycle spokes whir past it.

It's ironic that Honus Wagner's image is better known to modern-day fans than his career. It's just as iroic that his role in market forces is more valuable than his original employers ever imagined. Or maybe they did.