Can MLB Put An End To Fighting? 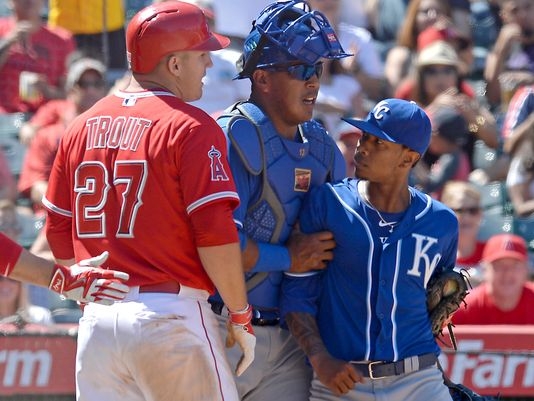 Baseball is a supposedly 'safe' sport.

Unlike football and hockey -- where dudes can’t walk past the age of 45 -- baseball players have long and healthy careers.

I mean, how physical a sport could baseball be if a 5-10, near-300lb Bartolo Colón can still play the game professionally at age 43?

However, this season, MLB has confirmed yet again that baseball is just as dangerous as football or hockey.

In May, we saw the Blue Jays and Rangers square off in the final game of their season series. We know that the impetus for this fight all began last post-season when Joey Bats flipped his stick after hitting the go-ahead home run in Game 5 of the ALDS.

Call it celebrating or gloating, either way the Rangers were none too thrilled at Joey.

Have Matt Bush, a former felon who wasn't even on the team last year, plunk Bautista in his final at-bat of the game.

Of course, we all known that this was only the set-up to the brawl.

The spark that ignited the powder keg was Bautista’s hard slide into second baseman Rougned Odor. Those two then proceeded to get in each other’s face. At least, until Odor KO’d Joey with one punch.

Attempting to show that fighting will not be tolerated, MLB suspended Bautista and Odor a whopping one and seven games respectively. That'll teach em’.

This, however, would not be the last royal rumble this season. The Orioles and Royals also got into the act.

The spark for this fight came when Kansas City pitcher -- and baseball's most hated player -- Yordano Ventura hit Orioles star third baseman Manny Machado with a 99mph heatseeker to the ribs.

Machado, who thought the Ventura was trying to plunk him after previous inside pitches, proceeded to charge the mound and body slam Yordano to the ground. This, of course, led to the obvious.

Surly MLB came down hard on the instigators this time around.

Ventura and Machado -- both of whom have previous histories of fighting -- received suspensions of nine and four games respectively as well as a small fine from the league.

There's not much beyond suspending and fining playerss that MLB can do to stop fights like these from occurring again. But that doesn’t mean they can’t drop the hammer in these two forms of punishment.

If MLB really wants to put an end to bench clearing brawls, they need to dish out fines and suspensions that will actually deter players.

Instead of single games, a fight could potentially earn a batter or fielder a two week suspension and a pitcher a near month-long suspension. What about fining players sums that actually affect their wallet and not just the chump change ones they get now?

Are these foolproof methods to put a stop to fights?

There are some dudes who just love to fight. Plus, there's the issue of having the players union approve a system of harsher penalties.

There may be no way for MLB to reign in its loose cannons, but they cannot continue to hand out these weak penalties and say they want to put an end to fighting.