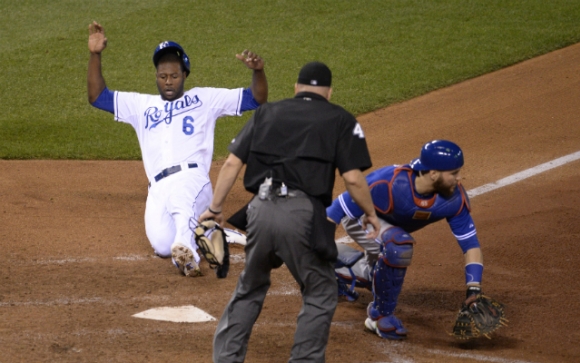 This year's American League Championship Series brought back as many memories as it made.

And in the process, Kansas City punched its ticket to a second straight World Series with a 4-3 Game 6 victory over Toronto that had equal measures of bizarro and drama.

The cool stuff crested in the late innings.

José Bautista had already gone deep in the fourth to keep the Blue Jays close, and he strode to the plate in the eighth with a runner on and his club down, 3-1.

The reason that blast tied the game was Ben Revere's heroic grab the inning before:

And after a 41-minute rain delay, the Royals scored the ultimate winner on an incredible sprint from first by Lorenzo Cain:

While Cain had flashed his afterburners like this in the ALDS against Houston, this jaunt is the one that'll be compared to Enos 'Country' Slaughter's famous Mad Dash for St Louis in the 1946 World Series:

Slaughter might still get the edge in ballsiness, as Harry 'the Hat' Walker had singled to left and was made possible by Boston SS Johnny Pesky freezing before relaying to home.

In this game, RF Bautista couldn't hear his teammates above the Royals fans delerious din and was trying to hold Hosmer to a single. Pyrrhic victory, as it turned out.

And no, this was nothing like Game 7 in last year's World Series. Alex Gordon still wouldn't have scored.

Another reason Bautista's second homer of the night only tied the game was due in part to this bit of controversy back in the second inning:

Look familiar? It did to Baltimore Orioles fans:

Technology is only as good as those who deploy it.

With an outfield stands vis à vis fence configuration like Kaufman Stadium's, how do the geeks at MLB Central not instruct cameras to be ready for mega-zooms whenever a long fly is hit?

Blue Jay fans, in particular, would like to know. TO still had a golden opportunity to advance their cause in the ninth: