Bumgarner Stuns Fans by Failing to Homer against Pirates 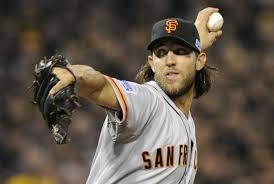 His batting, anyway. The pitching was another story.

The Giants' southpaw has hammered four dingers in 2014 -- the latest against Zach Greinke on 23 Sep -- but outside the NL West, he's got nothing. So he bore down on his mound work and left the hitting to others.

Like Brandon Crawford with the sacks jammed in the fourth inning of a scoreless game:

With that smash, Crawford became the first shortstop in post-season history to hit a grand slam. Considering they go back to 1903 -- there were precursors, but that was the first NL v AL tilt -- it's proof yet again that firsts are still possible in today's game. Thank Stats LLC for that, even though Crawford's blast is a level higher than red-headed stepchild data that usually harbors such feats.

But the night belonged to Bumgarner.

10 strikeouts and another rarity these days, a complete-game shutout.

Besides fanning the flames of interest for more teams and fans later into the regular season -- as in the final day, again -- the wild card game of death has indeed accomplished its true mission of enhancing the value of winning a division.

Frankly, it also restores some validity to the five-game format of division series, where a three-starter rotation can get the job done. That's hardly a reflection of the 40-man roster effort teams needed to reach the post season. However, with the one-&-done nature of the wild card, at least one team is forced to show its depth, while the division winner has what's now the luxury of riding its top-of-the-liners almost exclusively.

San Francisco doesn't seem to care either way. They're chasing their third World Series title in five years under the steady guidance of manager Bruce Bochy, whose done this too many times now to be as unheralded as he is to general fandom, just as he understandably was as a player. His team's in tough against the Washington Nationals, but hell, in baseball playoffs, every series is tough.

He'll have the Giants ready. That might even mean giving Bumgarner more time in the batting cage.