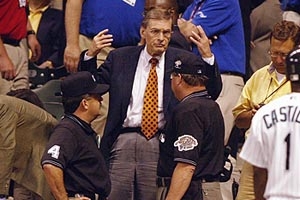 If there was ever a case for term limits it should be in the commissioner’s office.

Selig took over for Fay Vincent in 1992 in what amounted to a palace coup. His appointment carried the interim tag for several seasons, and he wasn’t elected full-time poobah until 1998.

When you qualify for Social Security, Medicaid, use a hearing aid, possess an AARP card, and hang a handicap parking pass in your rearview mirror, it's time to retire from any profession!

Selig's blunders far outweigh his achievements, as they well and truly gave the game black eyes:

This doesn’t even include his entry into the game by stealing the Seattle Pilots in 1970 and moving them to Milwaukee. I’m still bitter ... OK!

The man who's proud to be your Bud is credited with harboring labor peace between the owners and players, which is true. There hasn’t been a strike since that disastrous ending to the 1994 season. With baseball revenue over $8 billion in 2012 and the average player salary over $3 million per season, it’s no wonder everybody is happy!

The advent of the second wild card team has helped keep teams in pennant races longer than normal, but some look at the one-and-done format after playing 162 games and think the regular season schedule doesn’t mean much for the wild card teams. So far, the best thing to come out of the second wild card is it's already assured the Pittsburgh Pirates will make the post-season for the first time since 1992. Kudos to the Buccos!

Whoever takes over the commissioner role will have the daunting task of constant vigilance over the use performance enhancing drugs. The stiff penalties don’t seem to be dissuading players to take whatever substance that they think will give them an edge, and ultimately, a larger paycheck.

Expansion was one of Selig’s major accomplishments, but Denver, Phoenix, and Miami should’ve had major league teams long ago. Tampa Bay, well, not so much!

Montréal had theirs stolen; remember, they had years when they led baseball in attendance. They were also the best team in 1994, which was the wrong season to be a best team. But Selig and his merry band of 1%ers wanted a team in DC, so they got a team in DC. And the city where Jackie Robinson honed his skills for an historic entrance into MLB was pushed aside.

Further expansion to 32 teams and aligning divisions the same as the NFL has been discussed. Baseball probably could support two more teams, as it's a healthy game and large American cities such as Nashville; Charlotte; Indianapolis; Portland, Oregon; and San Antonio could easily support a major league team. And former Expo Warren Cromartie has rounded up enough money for Montréal to demand inclusion in that conversation.

One problem area the new poobah could address is the post-season schedule. This year, the wild card games are played on separate days, as opposed to last year when both games were played on the same day. This seems to complicate travel schedules even more, and while trying to showcase every game on TV is a novel concept, competing with the NFL is a losing battle. World Series games should not be played in November, agreed?

And if anything, a 162-game season deserves a seven-game series at the divisional level as well. It takes depth to survive the long haul, and a best-of-five just doesn't force teams to show they have it.

Much debate and speculation will commence over the next year, as candidates emerge to take the helm from Bud Selig.

Let’s hope that the anointed person won’t get Bud's awful toupee as a sort-of-passing-the-torch gift. This will be one retirement party where the joke's on you, Jack!