Brother, Can You Spare a Relief Pitcher? 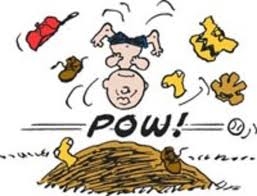 It was going to absolutely kill me...

But I was going to preface this article by saying that I had to give it up to the Yanks.

I wrote them off two months ago. Yet they keep coming back, kind of like lost luggage. It would suffice to say that their resurgence seemed to coincide with Brian Cashman re-acquiring Cubbies' 'outfielder' Alfonso Soriano, a move that had everyone around baseball shaking their heads in disbelief.

I wondered why he would move on a 38-year-old dude who, for the last ten years, has resembled a human fly-swatter at the plate and was the perennial league-leader in murdering worms. To this day, he will still chase anything high and outside or away in the dirt. He throws like he's got cerebral palsy and runs like the guy who signed that huge shoe contract when the Yanks traded him to Texas.

They gave him $50million and called it the Nike Cinderblock.

Anyway, it has been working out for the Bombers, and I like that because October is always better when it's The Sox and The Yanks going at it.

It seemed as though it was possible, at least until the start of this make-or-break, hugely important four-game weekend series in which the Yanks would play host to the Boston Lumber Company.

I thought that Baby ManRam and his Tigers thoroughly violated Mo and the Yankee staff three weeks ago! They are still talking about the shot Miggy hit off Rivera that perforated the ozone layer and has since caused problems with the Tri-State area's weather. And Fielder’s rocket shot that took down that airliner is still under NTSB investigation.

But it's been a while since I've seen an entire staff get tuned up this bad. Today, I saw fans running for the exits with their pants around their ankles all bloodied and battered. The first three games of the series have seen the Sox score 34 runs, and that's after putting up a 20-spot on Motown Wednesday night.

As hot as their offense is it's still across about the pitching, a fact not lost upon the irate New York beat-writers who have been trying to get sound-bytes from the chalk outlines of dead pitchers littered around the Yankee mound. That poor Huff kid who started today gave up so many tremendous bombs that Girardi had to make a pitching change after the rookie suddenly vanished. The only thing left of him was his shadow, seared into the infield until it is safe for the HazMat teams to work around it.

Ordinarily, I couldn't get drunk enough to watch the YES postgame show, but I just had to see the game highlights so I could pinpoint the exact moment Michael Kay's heart was ripped out of his chest. During the Joba interview, I raised an eyebrow when, in the background, an absolutely hysterical John Sterling was sobbing between cries of "Susan! help me please! Help me, God! This would never be happening if Mr Steinbrenner was still here!"

A hospital spokesperson would later say, "Mr. Sterling is now resting comfortably in a medically-induced coma. For safety precautions, he had to be drugged and then strapped into the "Hannibal Lecter-model gurney."

When the interview with Joba resumed, the only question he was asked about his nightmarish performance was, "It appeared as though you had Victorino struck out on that pivotal check swing in the 7th, but why does it appear as though you have Gary Coleman and Webster stuffed into your cheeks? Any comment?"

Then it was Mariano's turn. They caught up to the Blandman ... er, uhh ... the Sandman at the post-game spread while he was eating. It was then that I saw him up close and was struck by how emaciated this guy looked. I could tell he'd ingested some rice because it could still be seen lodged in his throat.

I wasn't impressed by the same old repetitive questions these clowns were asking, though. I would've been asking the more relevant questions like, "Mo, do you realize the startling resemblance you have to one of those wind-up Halloween skulls with the chattering teeth?"

Or how about, "Mo, if the Yankee medical staff can somehow find the cure for Ebola before it kills you, would you then consider coming back for another year?"

Then there's the million-dollar question, "Mo, would you mind if the guys just stand around here while you eat? We won't need quotes from you tonight because you're so dangerously underweight, we can practically see what you're thinking. So we'll just print what's on your mind, OK?"

As much as everything about the Yankees and Red Sox makes my skin crawl, I have to say that seeing them play each other in the post-season this year would be epic. The idea of seeing Mo being carted off the field on a stretcher after the Sox offense use him as a piñata one more time before he bails is just too good to pass up.

Anything can happen ... and it usually does, so it's going to be an interesting month.