Broken at the Break: Here's Your AL All-Snark Team 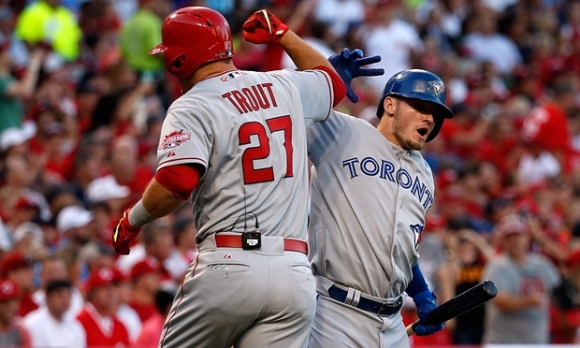 Now that the 2015 All-Star Game shenanigans are behind us, we've arrived at a tremendous opportunity to look at the anti-All-Stars.

Why? Because it's slightly masochistic, and I'm a glutton for punishment.

Yes, this is a backhanded salute to the dudes for whom ballot box stuffing has no place in the game. Consider this your All-Snark American League All-Star team.

It was astounding to watch Angels OF Mike Trout lead off the game with a home run and earn back-to-back All-Star Game MVPs, but he won’t be calling these guys teammates any time soon. Like, ever.

The first half hasn’t been kind to everybody. Sometimes you just have to let the numbers speak for themselves.

The Mariners are in a tough position with Zunino, the third overall draft pick in 2012. It seems like they're sticking with him just because of his draft status and the investment it entailedd. Why else would they be carrying a player hitting .160? Clearly, Trader Jack is trying to save his job.

Zunino is the quintessential AAAA player. He'd likely tear up the Pacific Coast League. Unfortunately, the AL West is an entirely different story. Zunino has the lowest BA amongst AL qualifying players by a whopping 22 points. He has a long way to go to catch Stephen Drew, and who ever thought that would become a rational statement?

Backup Catcher Jesús Sucre is even worse, batting a microscopic .038 in 26 AB’s.

Seattle's in this predicament because they cut backup catcher John Buck last year for no reason. Trading for Wellington Castillo seemed a bold move, as he was brought in to push Zunino and did for a grand total of 25 AB’ before being shipped off to Arizona in the Mark Trumbo trade. Anyone look to see how Castillo is hitting in the desert? It’s fitting, really.

In a season to date of total ineptitude, signing Kung Fu Panda was a harbinger of doom, and trotting out Napoli hasn’t helped. David Ortiz has the sniffles, and Hanley Ramírez is one of the worst-ranked OF’s by sabermetrics, much less the old-school eye test. At least they have 2013 to hold onto, and that parade that the Patriots threw in February was pretty neat.

Don’t start feeling sorry for Beantown. They reap what they sow.

One of the most astonishing facts about the 2015 All-Star game is the fact that there were no Red Sox or Yankees in the starting lineup for the first time ever, and Drew is Exhibit A as to why that happened.

Perhaps the Bronx Bombers should’ve made a stronger attempt to re-sign Robinson Canó, because he’s certainly earning his money in Seattle. Not!

Look for the Yankees to address their disaster zone that is second base at the trade deadline. A perfect piece would be to acquire the apparently coveted Ben Zobrist from the A’s. Watch, it will happen; bet on it.

It’s not often you see a player from a contender on an All-Snark team, but Valbuena has been just awful enough to man the hot corner for this squad. He’s been pretty good with the glove, so we’ll give him a pass in the field.

If it weren’t for super-rookie Carlos Correa and real All-Star José Altuve, the Astros' infield would be in shambles, given yet another injury to Jed Lowrie. More about Astros hitters later on down the page. Valbuena does have the distinction of being the leading hitter on the All-Snark Team, barely edging out Napoli by six points in the batting average department.

Does anybody else seem appalled at the rate of strikeouts by major league hitters this season?

Martin’s OBP is barely a notch above his batting average. He's also managed to amass one more K than base hits in the first half.

His teammate, Choo, is frustrating pundits as well as fans and Rangers management. Ameriquest, or the Ballpark in Arlington, or Globe Life Park, or whatever they’re calling it these days is one of the best hitters' parks in all of baseball, and if these two can’t figure it out, maybe it’s time to see if the Round Rock Express has any capable baseball players. There's no margin for error in the AL West, so Texas needs to figure it out quickly when the second half opens.

Souza can man RF for Tampa Bay until the cows come home because nobody really expected anything from Tropicana this season. So it’s bonus baseball at this point. Let’s try and cut down on the swings and misses in the second half, and it'll be a vast improvement. Is Bugs Bunny pitching?

OK, I’ll be the first to admit when I’m wrong and have completely misinterpreted a situation.

Carter was one of the most accomplished sluggers in the AL last season, belting 37 HRs and driving in just 88. Lots of solo shots for Mr Carter.

He's on pace to strike out over 200 times for the second time in his career and has emerged as a serious threat to challenge Mark Reynolds' major-league record of 223 Ks in 2009.

But am I wrong? This is the model GM Jeff Luhnow's hackable database seems to like. The algorithm is more complicated, of course, but in essence, as long as Carter goes deep 20-plus times a season, the 'Stros are fine with everything else he does -- or doesn't -- do.

Carter is the type of player that will do damage in the post-season. It may be a hunch, but I anticipate he'll help Houston win a couple of playoff games, if not an entire series. Did I really just use Astros and playoffs in the same sentence? Is this 1999?

Remember earlier, when we begged the question of what went wrong in Boston?

The Yoenis Cespedes trade went wrong, that’s what. Porcello was supposed to be the new ace of the staff since the Red Sox were unable to sign former ace Jon Lester.

Porcello has contributed to this mess by allowing 67 runs, with 66 of those being of the earned-run variety, meaning he was solely responsible.

Pitching every fifth day in Fenway Park isn’t going to help the measurable stats -- particularly ERA -- but lesser pitchers have thrived in Fenway, so we can throw park factor out the window.

Once again, here's Exhibit A as to why there were no Red Sox in the All-Star starting lineup. In fact, Brock Holt was the lone Red Sox All-Star representative. And that's Exhibit B as to what's gone wrong in Boston in 2015.

This is the easiest selection of them all, and by a wide margin. As stated before, I work for a certain major league baseball club located in the Pacific Northwest, and never in my life have I seen a relief pitcher get a standing ovation like the one newly anointed closer Carson Smith received when entering from the left field bullpen gate during a game in early June.

Something about getting three outs in a timely, non-life threatening manner will get fans to root for you rather quickly.

Rodney's completely lost it this season. His selection to the 2014 AL All-Star team seems like an aberration.

There are no more arrows left in his quiver. It's another case of Jack Z trying to save his job by forcing manager Lloyd McClendon to trot out a player that he signed, and they’re on the hook for so much money, what difference does it make at this point?

Rodney is likely to clear waivers and finish out the season in Seattle, where his tenure with the team will mercifully come to an end. Right now, Bobby Ayala would receive a warmer welcome at Safeco Field. Can somebody duct tape Rodney to one of his imaginary arrows and shoot him into the stratosphere? That might receive a bigger standing ovation than Carson Smith got.