Brian Poulson Is No Sidd Finch 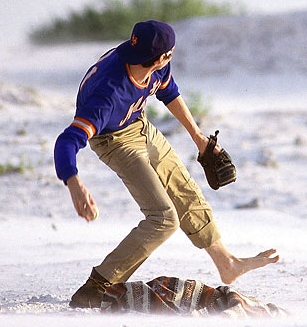 San Francisco's Academy of the Arts actually has a sports program.

And the Urban Knights have had a grand total of one baseball player drafted in the program's history.

In real-world terms, Poulson's journey from obscurity to a $250,000 free-agent signing with the Minnesota Twins is even more incredible.

What with 21st century technology, 24/7 social media, and sport's ubiquitous profile, common sentiment held that no stone is left unturned, and if a talent was hidden away somewhere, it had be due to ... issues. Sort of like the narrative in Albert Brooks' classic, The Scout:

Poulson could have become a tragic oddity reminiscent of Steve Dalkowski, the legendary flame-thrower who could never harness his gift and wound up homeless and in rehab before fate steered him home late in life.

But the former Healdsburg Prune Packer has gone from truck driver to driven athlete. It may be that the low-impact Academy of the Arts baseball program was the perfect place for him to start putting together the pieces of proper pitching mechanics.

Other MLB organizations were also aware Poulson's body of work had become dramatically more refined this summer, but the frugal Twins had more unspent draft bonus money than anyone else, so their bid won out.

He's been assigned to A-ball, along with other newly-signed Twins who were drafted. Now the focus will be on the mental aspects of pitching and his grasp of the craft's finer details. He'll be in a spotlight wherever he goes. That level is stocked with throwers who can bring it. Only those who learn to pitch advance to the AA level.

Still, given how far he's come and how fast he's got there, Brian Poulson is living the dream. With no fantasy involved.