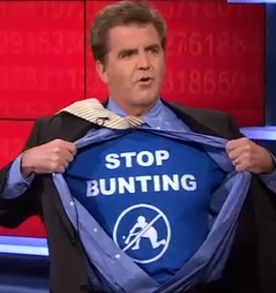 I am inclined to believe the latter.

Surely, I can't be the only one who cannot stand this pretentious, ignorant dullard who stalks Sabremetrics on the MLB Network.

The mere sight of his face-for-radio infuriates me. The fact that the dude's fugly is one thing, but who wants to listen to someone talk baseball who's never even played the game?

The closest this guy has ever been to a baseball bat was when he was being clubbed with one by the cool kids at the playground.

The only baseball he ever picked up was the one that crashed through his bedroom window while he was playing Dungeons & Dragons.

When the other kids were out playing baseball, Kenny was wearing a cape in his basement with his pants around his ankles. It was there he would wait for the other neighborhood dork to come over and play with their respective light sabers.

And while waiting, he probably had nerdist fantasies like this:

I watch the MLB Network because of guys like Harold Reynolds, Dan Plesac, Billy Ripken, and Sean Casey. Former players turned analysts who each have some 30 years of experience in professional baseball.

As former pitchers and position players, their keen insight affords them the ability to explain the game within the game. Fans young and old can learn a great deal about the intricacies of baseball from those dudes. They each have a unique and informative perspective which only comes from having played the game.

Then, off to the side, we see this clown Kenny, who keeps interjecting to disagree or contradict the statements and assertions of the real analysts.

There have been numerous occasions where I've seen the bewildered look of shock and surprise on their faces as Kenny spews some non-sensical, mathematic drivel that no normal person can comprehend. Where does this jamoke get off thinking he knows more about baseball than these former players?

Not everything sabermetric can tell you about a player.

Yet, these guys wouldn't be on Brian Kenny's team.

The 'Shredder' can't measure what a ballplayer is going to do. Anything you want to know pertaining to a particular player can be found on the back of his baseball card. Some dudes have more tools than a hardware store, but just never put it together. Then, sometimes, that 30th round draft pick ends up an All-Star in The Show.

Remember Mike Piazza? He was the last player taken in the entire draft and that was only because Tommy Lasorda was doing Piazzas father a favor by drafting him in the first place.

The point is, Brian Kenny is useless as a MLB analyst. He is smug and unlikeable, and that turns people off. As far as his 'formulas' are concerned, he may as well be speaking Farsi.

I'm hoping they don't renew his contract because my only other recourse would be to watch baseball on ESPN. Call me crazy, but I'd rather get a job as one of those dudes who distract ill-tempered bulls at the rodeo than have to look at, or listen to John Kruk.

So with that, I will conclude with yet another prayer and hope for once that it will be answered.