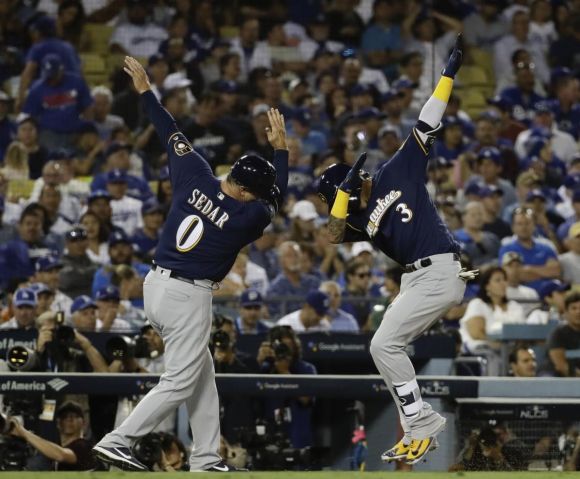 This is a pondering that's more suited to arise during the off-season when free agents like Bryce Harper and Manny Machado are seeking new contracts:

Where does all that luxury tax the big-brand clubs pay to sign the biggest start go?

First of all, be aware that keeping track of how it works can be as much fun as undergoing a federal audit. Secondly, it's obviously the small-market, small revenue teams who get the boost from receiving a portion of its revenues.

Los Angeles, of course, is a humongous mass of metropolitan humanity. The Dodgers have quite the tax bill.

Milwaukee is the smallest market to host an MLB team. They get many bennies.

In essence, then, it can be argued that the Dodgers have a financial stake in the team that just took the NLCS lead on them right now after the Brews' 4-0 whitewash of them in Game 3:

It's kinda tough to tell the difference between them and the high-priced spreads.

In small sample size situations like a post-season series, there can be a fine line between the abilities of, say, Machado and Milwaukee SS Orlando Arcia.

Dude had a clue.

If you had the opportunity to watch the game, you'd have noticed that LA starter Walker Buehler -- from Vanderbilt, the Harvard of the South -- pitched him the same sequence in Arcia's previous two ABs:two spinners followed by a heater.

So, after Arcia saw a pair of curves in his third appearance, he was sitting dead red.

Then there's Travis Shaw, not exactly a speedster, but dude's definitely a hustler, on the field and on the basepaths.

This was his first triple all season, made possible in part by high-profile Cody Bellinger not giving his all to get to the wall, assuming the ball was gone.

The Brewers hit the magical mix of talented major-leaguers this season, with the Christian Yelich deal looking like the trade of the year. He's done his bit getting Milwaukee this far, but the club's waiting to hear from him in this series.

No matter. Yet. Someone different's been stepping up for them in every game. It's the way small-market, small-revenue clubs gotta do it.