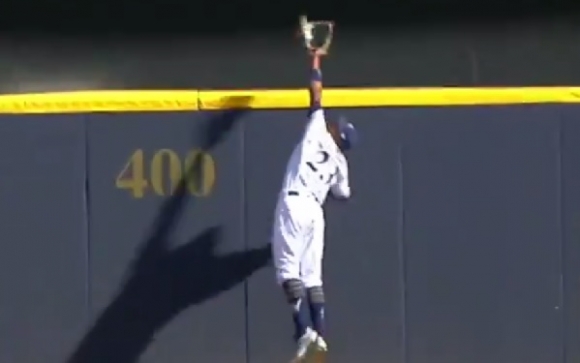 This is an interesting way to end a ballgame.

While walk-off homers are obviously exciting, we don't see the spectacular walk-off grab to end a game very often.

Even rarer is one that literally saves the game.

Well, you're in luck.

The Brewers CF clearly has some serious game.

Milwaukee closer Corey Knebel would no doubt agree, based on his expression of complete gratitude after the grab.

If that ball gets over the fence-- and by the immutable laws of science, it should have -- the Cardinals take a 7-6 lead with the Brewers getting one more chance in the bottom of the inning.

So yes, that was potentially a game-saving catch.

It gets even better when you consider the context.

The Brewers and Cardinals are currently chasing the Cubs in the NL Central, so this game was kinda important.

The win gave the Crew a split of their two-game set with St Louis and put the Cards six games behind the Cubs with September looming.

Meanwhile, the Brewers remained 3½ games back and still within reasonable striking distance.

While we're on the subject, let's check out some more game-saving grabs, courtesy of this helpful compilation:

Nothing wrong with that.