Braves Hudson Out for the Year 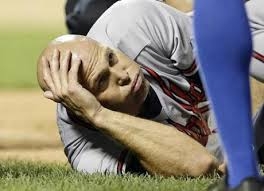 The news for the Atlanta Braves went from bad to worse regarding the injury report on pitcher Tim Hudson.

The ace's ankle was broken when he tried to cover first base for Freddy Freeman during their game against the New York Mets.

On his sprint and final stretching stride to beat out an infield hit, Eric Young inadvertently stepped on the back of Hudson's Achilles tendon, instantly forcing the weight of his foot onto Hudson’s ankle.

The gruesome video showed Hudson’s ankle bending at a 90º angle, followed by Young instantly scampering back to the fallen pitcher to apologize.

In reality, Hudson's foot slipped back to what is generally acknowledged as the runner's half of the base, ie- the outside half. Young was taking the route that every runner in the game does when hustling down the line.

Now, the report is Hudson will be out for the season and will undergo surgery as soon as the swelling around his ankle subsides. This news is the exact opposite from what the Braves pitching staff needed to hear.

"I think we've got to rally behind this, as a team and as a pitching staff," Braves manager Fredi Gonzalez said Thursday in USA Today. "We're going to miss him, but we've got a good club."

"I don't think you can replace Timmy, what he means to us," Gonzalez said. "We'll have a young rotation, but hell, you know what? We've got to grow up sooner or later."

Now, Atlanta will look to Brandon Beachy, who is coming off Tommy John surgery from last year, to take Hudson's place. Beachy, in 41 major league starts, has a 12-10 record and an era of 3.00.

He will be pitching for the Braves Monday against the Colorado Rockies.