Braves Decide to Bag It until 2017 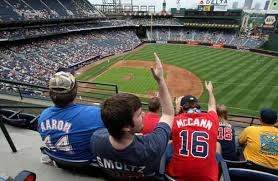 If there's anything promising for the Atlanta Braves after today's trade with the St Louis Cardinals, it's that new GM John Hart has been there and done that.

The there and that in question is re-shaping -- not necessarily re-building -- a team. It got Cleveland to the World Series. In Texas, he allegedly whiffed on getting Robinson Cano in the Alex Rodriguez dump, but Hart and then-skipper Buck Showalter engineered the Rangers' turnaround soon thereafter.

And now it's Atlanta's turn to wait a while.

Short-term, he said. The club's sales department must have insisted Hart work that into his ramble so they'd still have some shot at reasonable season ticket renewals.

The Braves plan on moving into their new suburban digs in 2017 and apparently feel they can settle for media money in the meantime. Hart's expecting his top prospects to make the most of added time in The Show, and this move makes room for catcher Christian Bethancourt to truly get acclimated at the top. If Hart can't get the deal he wants for Evan Gattis, then that bastion of defensive placeholders for hitters -- left field -- beckons.

Shelby Miller is a starter with two pitches and an allergy to the sixth inning. Maybe, with lower expectations in Atlanta, he'll be emboldened to increase his repertoire. If so, the Braves will have made a good deal instead of a salary dump.

Heyward must have visions of playoff checks dancing in his well-protected head.

Cardinals manager Mike Matheny has been toying with shifting Matt Carpenter to second in the order for reasons best known to him. Heyward can join John Jay as a leadoff candidate as well as bolster an outfield corps depleted by the Oscar Taveras tragedy. In this sense, the trade is typical Cardinals.

Take note of the throw-ins. Walden should be an immediate fit in the St Louis bullpen, whereas Jenkins has a 'ways to go before his impact can be evaluated. The Cardinals do well in this regard. Randal Grichuk was a virtual steal from the Angels in the David Freese deal for Peter Bourjos; his upside can be eye-popping.

Ironically, both Miller's and Heyward's can be again.

So St Louis looks to have re-loaded while Atlanta has unloaded. That means another season of hearing about the Cardinal Way while Braves fans can only hope Hart still knows how to find a way.