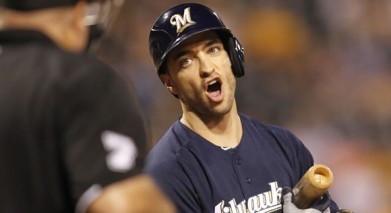 Reportedly, in order to get MLB players on his side before his drug suspension, Braun said that MLB urine tester Dino Laurenzi Jr was anti-Semitic and a Chicago Cubs fan.

Braun was trying to get the support of players such as Matt Kemp of the Dodgers, Reds first baseman Joey Votto, and Rockies shortstop Troy Tulowitzki by telling them this story, according to ESPN.

Yahoo Soorts has reported Braun was sued last week by a former friend named Ralph Sasson, who claims Braun's agent, Nez Balelo, paid him $5,000 to dig up information on Laurenzi.

This may explain why hardly, if any, players from his team or around the league supported Braun during that time. Kemp supposedly said felt “betrayed” and that he was “disappointed.”

Get in line Matt, behind Aaron Rodgers, the Brewers organization, and Brewer fans who felt the same way.

Braun has lied to several people and his camp has hinted he'd apologize and admit he lied about taking PED's. But if this report is true, Braun is not a good guy.

The picture is starting to come into focus that Braun will apparently say or do anything to get his way including smearing another man's reputation in order to save his own.

He may apologize for all he has done, but at this point, will anyone care?

Or the better yet, the question should be, will anyone believe him?