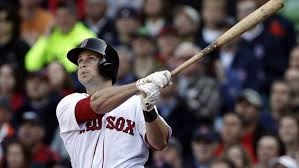 If the Boston Red Sox go on to win the AL East or the wild card, they will reminisce on this past week for a number of different reasons.

It started with a make-up game against the Rays, dropping a 2-1 heartbreaker that booked them a one-way ticket on short notice to second place. From rain delays to base running blunders, the game was far from predictable.

Daniel Nava failed to score from second on a double by Stephen Drew, which could have potentially gotten the BoSox a little momentum. He then tried to score on a sacrifice fly by Brandon Snyder but was called out on the play at the plate. Replays showed he was safe, but that's the way their luck was going at the time. It was a tough loss for Red Sox, but with a long home stand getting under way, they had time to force a change in fortune.

Seattle can always serve up a cure for what ails a contender, and Boston recoverd nicely, pounding the Mariners, 8-2.

Brandon Workman walked away with his first major league victory, with Jacoby Ellsbury, Dustin Pedroia, and Jarrod Saltalamacchia all going deep to support the cause.

The next night was not as easy, as it took anarduous 15 innings to get a result. But, the Red Sox got it, 5-4, in a marathon that took over five hours to complete. Drew won it with a single in the 15th, giving Drake Britton his first big league win after pitching two scoreless innings.

The following evening, the Mariners jumped to a 7-1 lead, entering the ninth with a commanding five-run cushion. Miraculously scoring six runs in the bottom of the ninth, the BoSox found themselves rallying to an astonishing 8-7 fairy-tale ending. Ryan Lavarnway, Brock Holt, Shane Victorino, Jonny Gomes, Dustin Pedroia, and Daniel Nava all had hits in the inning, with Nava driving in the winning run to finish off an extraordinary comeback.

Next, the Arizona Diamondbacks came to Fenway Park for a rare visit; so rare, in fact, that the Red Sox started out as gracious hosts. Boston ultimately took two of the three games, but the visitors still had at least one fond memory of the old yard with a 7-6 win Friday night, as they capitalized on a poor performance from Jon Lester.

Boston came back to win the next two as Jake Peavy made his Sox debut, giving up only two runs and four hits through seven innings in a 5-2 Red Sox triumph. Jarrod Saltalamacchia had two big dingers in the eighth, giving him ten for the season.

John Farrell's birthday highlighted the finale as his team gift-wrapped a 4-0 shutout. Felix Doubrant continued his steady string of performances, throwing seven scoreless frames and raising his record to 8-5. Jacoby Ellsbury had two RBIs for the Red Sox, while Pedroia and Victorino each had one to advance the cause.

The 5-2 home stand was important to the BoSox because the schedule only gets tougher in August.

Winning seven of their last 10 games, the Bostons will now travel to Houston for a three game series. They swept the struggling Astros at Fenway in April, and not much has happened to expect anything different this time around..

After the series in Houston, the Red Sox travel to Kansas City for four games with the red-hot Royals.

The AL East looks to be going down to the wire for a second straight season. Last year, Boston was on the outside looking in. The view is much better now.