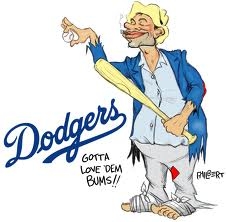 It's been an incredible run for the Los Angeles Dodgers, having gone over two months since losing a series.

But I say it happens tonight.

The right mix of factors have come into play, and Boston takes the three game set by winning the rubber match tonight at Chavez Ravine.

Jake Peavy (9-5, 4.25 ERA) starts on the hill for the Red Sox, and the right-hander has been everything Boston hoped he would be since being traded there a few weeks ago. Peavy has given up two runs or less in four of his five starts with the Red Sox since the deal that brought him from the White Sox a few weeks ago.

Peavy didn't factor in the decision his last time out, but was pretty effective in his 5⅔ innings of work in a San Francisco 3-2 walk-off win Tuesday night. He didn't seem overly excited about departing when he did, and perhaps that's part of the reason I see a solid return to the hill tonight ... not to mention his pitch count of just 92 the last time out

The Dodgers will go with Chris Capuano, and I think that also works very well in Boston's favor. Just look at his last three starts by using the Bovada data tool on our Home page and you'll see that, while he has won all of his last three starts, two of them were against the light-hitting Marlins and Mets, and in none of the three did he make it into the sixth inning.

I fully expect to see the Red Sox expose further what those teams didn't in Capuano, while Peavy will keep the Dodger bats in check, something teams in the recent past didn't do in the aforementioned Capuano wins.

Bovada's -112 for the Red Sox is practically a steal here, no matter how great the Dodgers have been over the last two months. They have to come back down to earth sometime, and this looks like the perfect situation.