BoSox Win in a Miracle 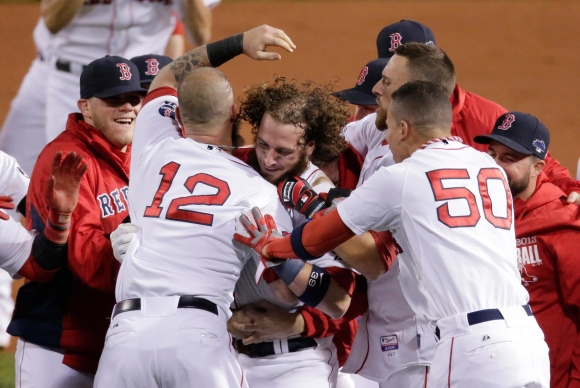 Well how about that! One night after a 17-K, one-hit debacle, the Boston Red Sox came back and tied what had been a Detroit Tigers' 5-0 game with two outs in the eighth inning.

When it looked like Max Scherzer would follow up Anibal Sanchez’s downright nasty performance, the Sox turned right around and said, “Hey we're here to stay.” This isn’t the walking Dead Sox; this is playoff baseball here in Boston.

In all my years of watching baseball, I've never, ever seen anything like this.

It goes beyond Game 4 of 2004; this is way ahead of Game 5 of the 2007 ALCS; this was just plain amazing. The Sox struck out 17 times in Game 1, and then Scherzer racked up 13 K’s of his own, but then in the eighth inning, the Boston bats woke up and got to Detroit’s bullpen.

And then the magic happened.

With Will Middlebrooks on third, Jacoby Ellsbury on second, and Dustin Pedroia on first, David Ortiz stepped up to the plate, having struck out twice in his first three at bats. That didn’t faze the Sox bopper, as he lined the first pitch he saw into the bullpen to tie the game, and the rest was history.

The Red Sox and Tigers are now tied in this series with one win apiece. After the Tigers ruthlessly shut the Sox down in a game that looked more like the fight between Apollo and Drago than a night at the ballpark, the never-say-die Red Sox clawed back and won with some help from the baseball gods. To say this was a vital comeback is an understatement. Had Boston been down, two games to one, going to Comerica Park, the odds of a return to Fenway would have been astronomical.

Now the series shifts to Detroit with renewed resolve from the BoSox. John Lackey expects to bring his best as he opposes perennial Cy Young award winner Justin Verlander. Both pitchers have been solid all season, but Verlander has been red hot of late.

As is always the case when facing Verlander, hitters will be severely challenged against him. But after last night's improbable comeback, Boston's batters will go into this battle with renewed confidence.