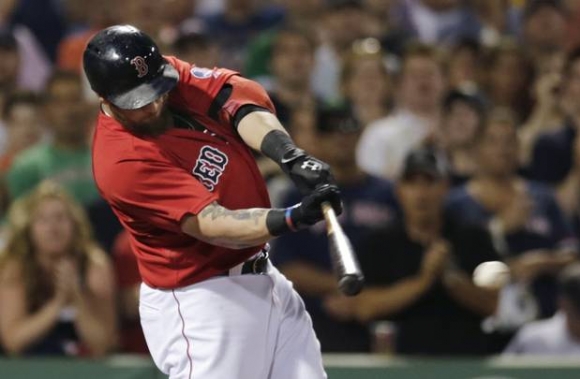 Cue the duck boats in Boston!

The Red Sox have taken the first two of a four-game series versus the Blue Jays, a weekend in which many thought would be the ultimate test.

So far, the Sox are passing with flying colors.

Many fans were willing to throw the first game away, with Jon Lester on the mound against the renewed Chien Ming Wang. The Bosox did not disappoint, though, as their lineup produced seven runs in the second inning, giving Lester the big lead he usually needs. The slender southpaw was throwing a no-hitter for a while. He then gave up two runs but held the Jays at bay into the eighth and would have cruised through that, too, had he not slipped on the muddy dirt of the mound.

Lester seemed very pleased with his effort on Thursday night. In fact, everyone was pleased with what he did against the Jays that night.

“When you have a seven-run lead, it takes that pressure off to make the perfect pitch,” Lester said. “Just keep the ball down and keep it in the park. I was able to stay down in the zone the entire night. The only hard-hit ball scored two runs and I made a pretty good pitch.”

Bottom line, Lester gave the Sox what they needed, which was a reason to keep him on the staff rather than shove him off to the phantom DL. Better yet, he gave Boston that brilliant effort right when the Sox needed him most; he may be streaky, but you can still count on him to pull through.

While Lester gave the Sox an easy win, Friday night’s game was more of a test of mental toughness than anything else. Rookie Allen Webster did well until he ran into some trouble in the sixth inning as the Jays pulled within one. Toronto chipped away at Boston’s lead and eventually tied it up on a homer off Andrew Bailey (what’s up with that guy?). Johnny Gomes came through in a pinch-hit at bat like he always seems to do, as the Red Sox put two on the board to give them a 7-5 lead that they would keep for the remainder of the game.

At the season's midpoint, when it comes to the Sox, to date they have been doing everything right. At 49-33, Boston is the best team in the American League. They hold a healthy 3½-game lead over the Baltimore Orioles and a 5½-game lead over the New York Yankees. With the All Star break looming on the horizon, the Red Sox will get a much-needed rest before the second half.

But make no mistake about it, these Sox are here to stay.